The South Carolina legislature has voted to remove the confederate flag from the state grounds and it was done at 10:00am today to the accompaniment of cheers from the assembled crowd. This follows a wave of other steps taken by other southern states to remove the flag from public display.

Some defenders keep insisting that the secession of the confederacy had nothing to with slavery and thus the flag was not a symbol of support for that odious institution. I am by no means a scholar of the Civil War but it is hard to read the declaration of independence by South Carolina adopted on December 24, 1860 and not feel convinced that they were trying to preserve slavery.

But while the South Carolina legislature moves to correct its past support for the flag, the US Congress seems to have got itself into a mess with some members trying to preserve the display of the flags in national cemeteries.

[House Speaker John] Boehner was forced to halt consideration of a government funding measure after it became engulfed by the Confederate flag controversy and whether it was appropriate to display the flags at national cemeteries where Confederate soldiers are buried.

The dispute pitted Southern conservatives who asserted that the tradition was part of their heritage against members of the Congressional Black Caucus who view the flag as a symbol of slavery and oppression.

It is true that removing the flag is just a symbolic gesture but symbols can be important, and the rise of the rainbow flag and the lowering of the confederate flag powerfully symbolizes some of the changes for the better that are taking place in US society these days. 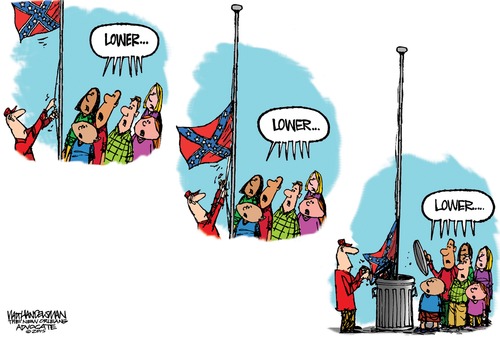