The Ada Initiative fundraiser was a phenomenal success, and one of the cool results is that we’ll be having an Ally Skills workshop at Skepticon. That’s good, and I think they’re doing it right, with an expert to tell the men what to do and what not to do.

These things can go so wrong, though.

A conference celebrating Grace Hopper and women in computing did it in a terrible way: they had a Male Allies Plenary Panel in which a small group of big name male tech leaders (including a guy from GoDaddy, believe it or not) were put on the stage to tell everyone how good they are at supporting women.

I can guess how everyone of you reading that last sentence were cringing. You know what came next, right?

The assembled white men set out to tell the audience what their companies are doing to make women more welcome and how men and women (yes, that’s right—women, too) can change the boys’ club culture in tech.

Instead, they ended up reinforcing many of the stereotypes women are already all too familiar with. In essence, their advice to women was: Work harder, build great things, speak up for yourself, lean in. It got so bad that at one point, the audience started heckling the speakers.

See also Microsoft CEO Satya Nadella’s recommendations to women. This was so predictable that the attendees had bingo cards ready. 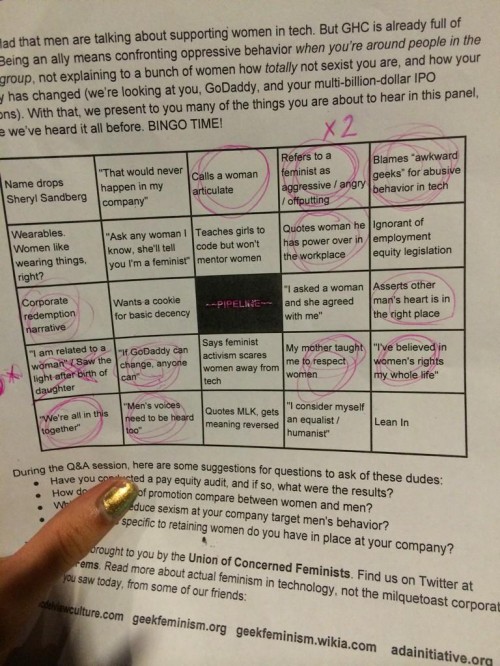 Now I do think the Ada Initiative is doing it right, and they aren’t putting guys on a pedestal to mansplain ally skills to everyone, but there is so much potential for guys to embarrass me for my sex. Like the time at an atheist conference when a white male atheist stood up to confront Sikivu Hutchinson, telling her that race wasn’t a problem in the atheist movement because he, personally, did not see color and was going to treat all the black speakers exactly as he would white people.

That’s what I dread. We’ll get a good presentation, the Q&A will roll around, and some wanker, like the pair who got their photo by the elevator sign last year, will be in attendance just for laughs and will ask some question that they regard as clever and pointed, and then I’ll just have to puke on their heads, right there in public. Really, public emesis is one of those things I hate. I won’t feel good about it. They’ll really feel awful. I just hope it doesn’t happen.

(There’s also the possibility that I’ll be trying so hard to be a good ally myself that I’ll say something stupid. That happens, too, and it’s even worse.)

Writin’ an exam » « Atheists, wake up to the way your world works