I’m both, but I think I oscillate. I was looking at the British Humanists’ Thought For The Commute campaign, which puts positive messages of humanist philosophy on the London Underground. I like the idea, and I like the messages. But I saw this one first and it set me back — I must be in the atheist phase of my cycle. 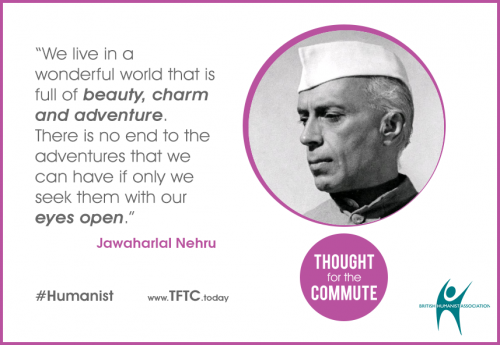 My first thought? We live in a perilous world that is full of ugliness, pain, and danger, and how dare you close your eyes to the suffering of humanity. I thought of Darwin and the ichneumonid wasps that horrified him so much — I don’t think they made him a humanist, but made him reject the idea of a benevolent god.

I think the natural domain of my atheist side is anger, while the humanist side lives in a world of hope — we need both, the one to drive us to break the shackles of the past, the other to give us reason to build anew. Which reminds me of one of my favorite quotes from the great anarchist, Peter Kropotkin:

The history of human thought recalls the swinging of a pendulum which takes centuries to swing. After a long period of slumber comes a moment of awakening. Then thought frees herself from the chains with which those interested — rulers, lawyers, clerics — have carefully enwound her.

She shatters the chains. She subjects to severe criticism all that has been taught her, and lays bare the emptiness of the religious political, legal, and social prejudices amid which she has vegetated. She starts research in new paths, enriches our knowledge with new discoveries, creates new sciences.

Of course, he then goes on to point out that a period of calcification follows, in which the chains are reforged, and we need a periodic shakeup to keep everything lively.