I was recently getting dunned by kooks insisting that a live pterosaur had been found. I’d love to see a pterosaur, but I’m afraid they’ve been extinct for over 65 million years; I’d also like to have a conversation with my great-great grandfather, John Page Hurt of Saylersville, Kentucky (I’m pretty sure he fought in the Civil War…on the wrong side), but I think we can be realistic about the likelihood of that happening. I took a look at the pterosaur information anyway, though, and discovered something interesting. There isn’t any evidence. There’s just one fanatic.

Here’s the kind of evidence they present. You’d expect a blurry photo of some flying creature, right? Or maybe claw marks, or scattered fewmets…none of which would be particularly persuasive. But no — we don’t even get that much. We get photos like this: 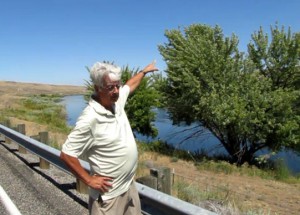 That’s it. Not a picture of the creature, but a picture of a guy pointing to a place where he claims to have seen a glowing light. Or sometimes we get this: 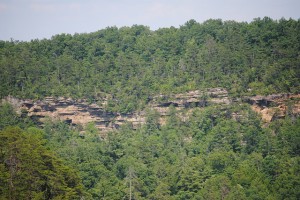 A generic picture of some trees in Kentucky, where some guy said he saw a pterosaur. Twice, no less.

These stories are terrible and pointless. There is no evidence here.

And then something else emerges — all the sources sound dreadfully familiar. Here’s a list of some of the sites I found, and the authors’ names where available.

Same stories, same pedantic, boring style, same lack of understanding of what constitutes evidence. It turns out that they’re all by the same guy, Jonathan Whitcomb, who’s been busily dropping turds all over the internet to make it look like there is an active community of researchers tracking down the wily pterosaur. There isn’t. And he confesses to rampant sock puppetry!

If you had Googled something like “live pterosaur” in 2005, the first page may have included a site that included the words “stupid,” “dinosaur,” and “lies” in the URL. Yes, it was libel, and that site is probably still out there; but try searching on “live pterosaur” today and you won’t see that libelous site listed on the first three pages of Google. You will find that most of the pages are positive about the possibility of modern living pterosaurs. The few that are negative are at least not libelous.

My purpose in using the pen name “Norman Huntington” differed from that of Alice Sheldon, but is was equally valid. I got around potential bias in readers by using that name instead of my own. The difference is this: I was trying to attract attention to the basic idea of modern pterosaurs, not to my own writing ability. (In fact I altered my writing style for those blog posts using “Huntington.”)

But it’s OK that he’s playing these circular SEO games, because he’s not trying to peddle his writing commercially — it’s just so gosh-darn important that everyone know about these pathetic pterosaur stories, so he’s just got to play these sneaky games to avoid criticism and get his essential story told.

There’s another motive, too: he’s a creationist who thinks finding a ptersoaur would defeat evolution, and he’s using his book and web pages to promote the Mormon religion.

Consider Helaman 5:50, regarding the conversion of many Lamanites, after the miracle in the prison with the brother-missionaries Lehi and Nephi. Lamanites who did not see the miraculous fire believed the words of the eyewitnesses who did see it: “And it came to pass that they did go forth, and did minister unto the people, declaring throughout all the regions round about all the things which they had heard and seen, insomuch that the more part of the Lamanites were convinced of them, because of the greatness of the evidences which they had received.” Latter-day saints rejoice for those who listen to the spiritual testimonies of those who had received confirmation of the truth by the power of the Holy Spirit. Just as missionaries may appear, on the surface, to differ from those they teach, eyewitnesses of strange flying creatures are from various countries and cultures, appearing to differ from those who have been raised in Western countries in which universal-extinction ideas are taken for granted for dinosaurs and pterosaurs.

Greatness of the evidences, indeed.

There’s also another place where you can find the story of the living pterosaur: the wikipedia article on “ropen”. It’s pure mush regurgitated from Whitcomb’s pages; the only sources cited are from Whitcomb, with the exception of mentioning two paranormal reality TV shows, “Destination Truth” (on SyFy) and “Monster Quest” (on the History channel). It’s a completely credulous and pro-bullshit page, and is a perfect example of why I don’t let my students ever cite Wikipedia. It’s also got Whitcomb’s fingerprints all over it — he was formerly an editor going by the name “jondw”, although he seems to be an ex-editor now. The page that contributes to his PR efforts for the totally fictitious creature “ropen” still stands, though.