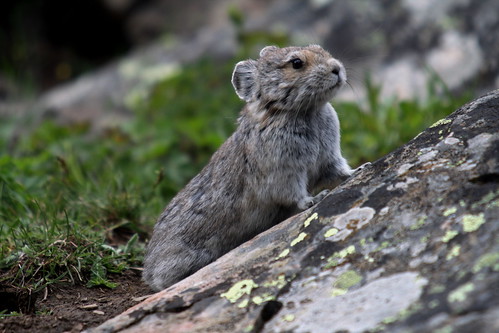 Any excuse to post a photo of a pika is a good one.

This is interesting: a new paper in Science purports to chart the cost of protecting what’s left of the world’s biodiversity, and the figure seems be eliciting gasps:

We estimate the cost of reducing the extinction risk of all globally threatened bird species (by ≥1 IUCN Red List category) to be US$0.875-1.23 billion annually over the next decade, of which 12% is currently funded. Incorporating threatened non-avian species increases this total to US$3.41-$4.76 billion annually. We estimate that protecting and effectively managing all terrestrial sites of global avian conservation significance (11,731 Important Bird Areas) would cost US$65.1 billion annually. Adding sites for other taxa increases this to US$76.1 billion annually. Meeting these targets will require conservation funding to increase by at least an order of magnitude.

I haven’t taken a look at the methodology, what with being on the wrong side of the JSTOR Curtain, but a reviewer quoted by Daniel Cressey in Nature’s article on the paper has said the work seems “smart,” though he does point out that its scope is limited.

Henrique Pereira, who works on international conservation issues at the University of Lisbon in Portugal, says that although there are uncertainties inherent in extrapolating from birds to all species, the work is an “extremely smart paper”. “For the first time we have an estimate of how much these targets will cost,” he says. “For any negotiations that occur over the next few years [on CBD targets], these numbers can be used as a reference.” But Pereira also points out that the figure is for just two of the 20 targets agreed by the CBD. “If you look at the range of targets for 2020, the total bill will be higher,” he says.

If the paper’s emphasis is on protecting habitat, as the abstract and the Nature coverage seems to indicate, then there are a few issues unaccounted for. The North American pika, for instance, is in trouble — and not because its habitat isn’t legally protected. Of course in the absence of a copy of the full paper I really can’t do anything but armwave on its possible limitations. [Edit: I now have a copy. thanks!]

But writer Daniel Cressey’s angle on the $76 billion figure in his news piece in Nature is interesting. His lede:

Protecting all the world’s threatened species will cost around US$4 billion a year…. If that number is not staggering enough, the scientists behind the work also report that effectively conserving the significant areas these species live in could rack up a bill of more than $76 billion a year.

Cressey does include a quote from study leader Stuart Butchart mentioning what we get back from protecting that biodiversity, including things like pollination services (estimated at $2 billion) and carbon sequestration ($6 billion), Butchart also mentions that $76 billion isn’t a huge amount given what we as a species spend on other things.

An example: the world plowed $1.74 trillion into military expenditures in 2011, according to the Stockholm International Peace Research Institute. $76 billion is a scoche more than 4% of that.

Or, for a less obvious example, $76 billion spent worldwide to conserve biodiversity is a significantly lower amount than tourists spent in California in 2011, according to one estimate. A person with access to surveys could tease out how much of that gross income would disappear if California lost its biodiversity; at least some of those tourists came to see the redwoods and the Joshua trees.

Y U NO BELIEVE CREATIONISTS STUPID? » « The ducks are gonna get you