A beer company, Molson, came up with a cunning plan. Their market is primarily male, so they bought ads in women’s magazines, not to broaden their market, but to set up a ploy to appeal to men.

Here’s the ad they placed in Cosmopolitan, a magazine read primarily by women. 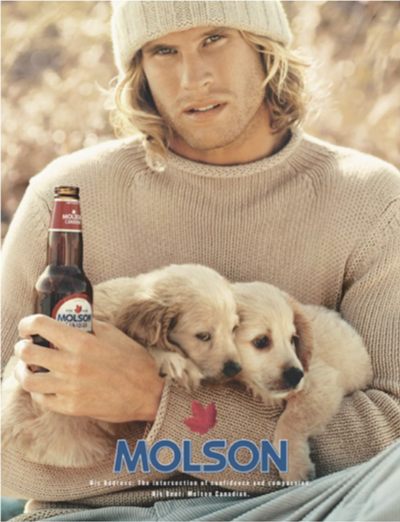 Then they placed this ad in magazines like Playboy, read primarily by men. 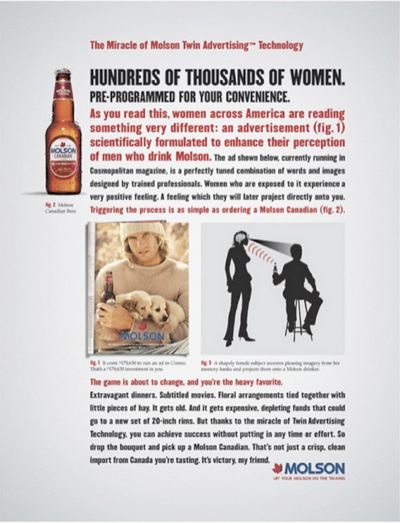 If you can’t read it, here’s the ad copy.

HUNDREDS OF THOUSANDS OF WOMEN.

PRE-PROGRAMMED FOR YOUR CONVENIENCE.

As you read this, women across America are reading something very different: an advertisement (fig. 1) scientifically formulated to enhance their perception of men who drink Molson. The ad shown below, currently running in Cosmopolitan magazine, is a perfectly tuned combination of words and images designed by trained professionals. Women who are exposed to it experience a very positive feeling. A feeling which they will later project directly onto you. Triggering the process is as simple as ordering a Molson Canadian (fig. 2).

Extravagant dinners. Subtitled movies. Floral arrangements tied together with little pieces of hay. It gets old. And it gets expensive, depleting funds that could go to a new set of of 20-inch rims. But thanks to the miracle of Twin Advertising Technology, you can achieve success without putting in any time or effort. So drop the bouquet and pick up a Molson Canadian…

The ad is a success in one sense: it’s getting a lot of attention paid to Molson Canadian, and if you believe there’s no such thing as bad publicity, sure, it works.

But in another sense, it’s just closed off a chunk of the market for them. Assume they are correct, and that the ads can ‘program’ or at least bias women to have a specific attitude towards men. The effect relies entirely on women not seeing the men’s ad, which announces that the women are being manipulated. The fact that both are being juxtaposed all over the place means that now the only feeling women will project directly onto men drinking Molson’s beer is one of mistrust, a very negative feeling.

It was stupid. It was frat-boy stupid. It’s just too bad there are a heck of a lot of frat boys out there who will think it’s cool.

For those who argue that it’s just a funny ad: OF COURSE, this ad is manipulating men. It won’t, by intent, convince women to buy Molson beer. The ad campaign is targeted entirely at men, and it works because there are a lot of men who will laugh at an ad that makes out women to be stupid and easily swayed by sweaters and puppy dogs.

What you’re missing is that the response to the ad, these juxtapositions of the two commercials, shows that they are incredibly dismissive of women. Molson is playing up the idea that women are gullible and not very bright, and that men will get a kick out of a campaign that claims to manipulate women in the shallowest possible way.

And of course, if it works and sells beer, it shows that men are gullible and not very bright. Sexism hurts men and women, since here it is, used to trick people into drinking crappy beer.

Why I am an atheist – T.E.P. » « Arkansas is promoting sexual ignorance