Arkansas schools are promoting abstinence-only sex education, through a program called “The Real Deal”. Like all abstinence-only programs, it’s foundation is in morality (their byline is “abstinence builds character”, which isn’t true, unless you mistake sanctimonious prudery for character) and lies — they announce statistics on their main page that claim that their abstinence programs reduce sexual activity by 30-40%, although they don’t bother to give us a source for those numbers, and all the other evidence available says that abstinence-only fails in comparison to comprehensive sex education.

On their site, they do cite a general source, WebMD. Let’s see what what WebMD has to say about abstinence-only sex ed, shall we?

Students who took part in sexual abstinence programs were just as likely to have intercourse as those who did not. And, those who attended the classes reported having similar numbers of sexual partners to those who did not attend the classes. Mathematica also found out that the average age of having the first intercourse was the same for both groups – just a little less than 15 years old.

Four different abstinence-only programs were examined from around the USA. Students were about eleven when they participated in these programs in 1999. They were surveyed again in late 2005 and early 2006 when they were about 16.

They found that about half of the abstinence-only students had experienced intercourse and about half of the control group (having no program) had also. The 2,057 students were from Miami, Milwaukee, Powhatan, VA and Clarksdale, MS – with both urban and rural settings represented.

The site also touts True Love Waits, a page created by LifeWay Christian Resources, providing “Biblical solutions for life”, which is owned by the Southern Baptist Convention…which reveals the real motivation behind this organization. Has anyone ever seen a genuinely secular abstinence-only program? They all seem to be driven by a conservative social agenda that wants to police children’s thoughts and behaviors, and force them to conform to a failed and obsolete biblical model of culture. At best, they strain to strip the program of any appearance of faith-based thinking (does that remind anyone else of Intelligent Design creationism?), but they can’t hide the fundamentalist/absolutist foundation of their ideas.

They’re also ludicrously stupid. Look at what some Arkansas parents discovered that “The Real Deal” had their kids signing: a card promising to conform. My favorite part is the expiration date. 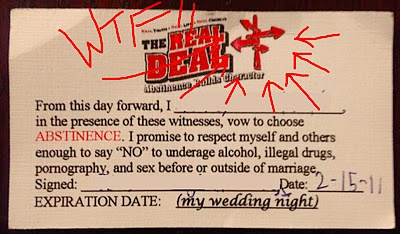 My wedding night was 31 years ago. Woo hoo! Alcohol, illegal drugs, pornography, and sex outside of marriage, here I come!

The only real deal for sex ed is comprehensive sex education, which also encourages restraint and good sense, but gives accurate information about how to prevent pregnancy and sexually transmitted diseases. Anything less is encouraging ignorance, and we’ve got the example of a few thousand years of Christianity to show what a mess that makes of people’s lives.