It’s another frantically busy day, so I don’t have time to give you the full run-down on the misleading nonsense Terry Mortenson from Answers in Genesis gave last night, but I do want to give one example. In one section of his talk, he referenced an article in Scientific American which discussed a hominin find: the specimen called “Lucy’s baby”, the bones of an Australopithicus afarensis, who was 3 years old when she died about 3.3 million years ago. He showed this diagram of the fossil — in orange are the bones actually found, in white are the ones that had to be reconstructed and interpolated from other Afarensis specimens. Mortenson added his own labels on the left, though. 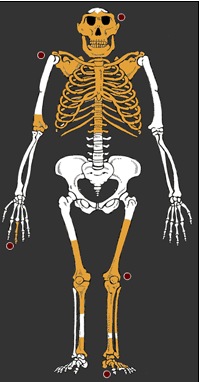 He pointed out that many of the features described weren’t present in the bones from this specimen, implying that they were just making stuff up. Then what does he say? “Look at that: gorilla, ape, ape, chimp, chimp. They called this a stunning new human fossil, but all the evidence says it’s an ape.” I’m going to hold him to the same standard of scholarship they insist upon in their analysis of the Bible: when the Bible says their tribal god told Noah to bring two of every kind on the Ark, that means he could not have left any of the kinds behind. Mortenson plainly said that all of the evidence in this article says Australopithecus afarensis was an ape. Take a look yourself.

Scholars agree that A. afarensis was a creature that got around capably on two legs. But starting in the 1980s, a debate over whether the species was also adapted for life in the trees emerged. The argument centered on the observation that whereas A. afarensis has clear adaptations to bipedal walking in its lower body, its upper body exhibits a number of primitive traits better suited to an arboreal existence, such as long, curved fingers for grasping tree branches. One camp held that A. afarensis had transitioned fully to terrestrial life, and that the tree-friendly features of the upper body were just evolutionary baggage handed down from an arboreal ancestor. The other side contended that if A. afarensis had retained those traits for hundreds of thousands of years, then tree climbing must have still formed an important part of its locomotor repertoire.

Like adult A. afarensis, the Dikika baby had long, curved fingers. But the fossil also brings new data to the debate in the form of two shoulder blades, or scapulae–bones previously unknown for this species. According to Alemseged, the shoulder blades of the child look most like those of a gorilla. The upward-facing shoulder socket is particularly apelike, contrasting sharply with the laterally facing socket modern humans have. This, Alemseged says, may indicate that the individual was raising its hands above its head–something primates do when they climb.

Further hints of arboreal tendencies reside in the baby’s inner ear. Using computed tomographic imaging, the team was able to glimpse her semicircular canal system, which is important for maintaining balance. The researchers determined that the infant’s semicircular canals resemble those of African apes and another australopithecine, A. africanus. This, they suggest, could indicate that A. afarensis was not as fast and agile on two legs as we modern humans are. It could also mean that A. afarensis was limited in its ability to decouple its head and torso, a feat that is said to play a key role in endurance running in our own species.

Even looking at the simple illustration, you can see evidence that this animal had differences from other apes — look at those femurs! The article also makes it clear that they were using new data from this one specimen in addition to data from other A. afarensis specimens to reconstruct morphology.

It doesn’t say anything about a voicebox (the fossil included a hyoid bone) or cranial capacity; I guess Mortenson’s summary was a composite of multiple sources, which is fine, but it is something which he considers unforgivable if scientists do it.

But this article does plainly state that the fossil “has clear adaptations to bipedal walking in its lower body” — it’s merely highlighting the differences from modern humans because the similarities are well known.

Anyway, now you get the tone of the evening. Mortenson kept bringing up scientific studies in between his bible verses, and in every case he mangled and distorted and lied about them, while the audience tittered at those wicked evilutionists. He also brought up Piltdown man (a hoax that was discredited by scientists) and Nebraska man (a bit of newspaper sensationalism that never made it to the scientific literature), and claimed that every hominin fossil was the product of imagination and fraud.

You don’t believe he could have been so dishonest? We don’t have a recording of last night’s talk, but here’s an audio recording of the very same talk given a few months ago. It really is nearly exactly identical, and if you dare to suffer through it, you too will see what a disreputable fraud the entire Answers in Genesis enterprise is. When I was listening to this guy, I marveled at him — I couldn’t tell whether he was ignorant, incompetent, or a professional con-man. I suspect it was a ripe and pungent combination of all three.