Today was lovely, and I had to wait outside for a delivery, so I decided to bring His Holiness out with me. I chatted with neighbors and read about swamps, and he explored the village and had some salad. We live in a cul-de-sac sort of arrangement (it was literally the only flat we could get – the rental market in Dublin is not OK), which means that our singularly un-athletic cat only has two ways to get out, and has shown little interest in either of them. That means we get to let him explore a bit, and eat grass to his heart’s content.

Our recent trip the the vet confirmed that his hips became a bit deformed in his childhood on the street, and that he needs to lose a couple kilos. We’ve been regulating his food intake for a while, since it became clear early on that his fondest ambition is to become Orb. Apparently it hasn’t been enough, so we’ve scaled back a little more, and I’m trying to let him out more so he’ll get exercise. We’ve tried string, laser pointers, and all the other stuff, and he’s just too lazy to actually put in the effort.

But put him outside? The amount of tail twitching alone probably burns a calorie or two. He’s got his favorite clump of grass, but he samples all around the village. I was worried initially that he might eat something unhealthy, but he’s shown no interest at all in anything but grass. The dude just wants his salad.

He’s shown a great deal of interest in birds, but this area is filled with more athletic cats than he, so while I do monitor him, I’m not particularly worried that he’ll catch one. He’s a great companion, but a mighty hunter he is not. 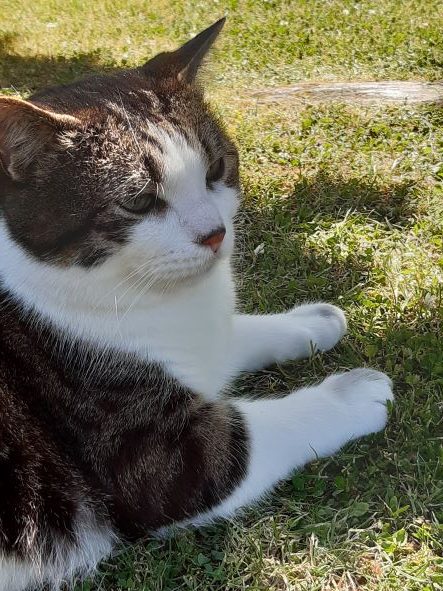 Taking a break between circuits of the village

Breaking news: Repeated exposure to natural disasters may harm mental health! » « Video: The U.S. Supreme Court may be about to preemptively block the E.P.A. from regulating things like carbon emissions