Gurbanguly Berdimuhamedow, president of Turkmenistan, is doing us all a favor and closing the gates to hell!

For those who are unfamiliar, the “Gates of Hell” (also known as the Darvazagas crater) is a huge sinkhole in Turkmenistan that is thought to be the result of Soviet oil exploration, which collapsed a natural gas cavity, creating a sinkhole. The gases coming out of it were lit on fire to keep them from spreading at ground level and poisoning people.

In a lot of ways, that was probably a good call. While the smoke from the crater isn’t great for either local life or for the climate, it’s almost certainly better for both than the unburnt gas would have been. That said, they expected the fire to last for a couple weeks, not half a century, and the fumes from the fire have been causing problems. So, when I first heard that there are new plans to extinguish the fire and seal it off, I had one brief, happy moment where I forgot what world I live in, and thought that it was because of the harm being done to the environment (a category in which I include humanity). There are actually a number of underground fires (many of them in coal seams) that are emitting CO2 and other dangerous chemicals, and are obviously are dangerous to any structures or infrastructure above them. To be sure, Berdimuhamedow does seem to be trying to gain whatever “green” points he can, but…

Berdimuhamedow said that the burning crater “negatively affects both the environment and the health of the people living nearby” and that Turkmenistan is “losing valuable natural resources for which we could get significant profits.”

Turkmenistan possesses the world’s fourth largest reserves of natural gas in its underground, intending to significantly increase its export of gas to many countries such as Pakistan, China, India, Iran, Russia and also Western Europe by 2030.

Turkmenistan isn’t exactly the worst offender when it comes to the climate or other environmental issues, but this is very much part of an ongoing trend – world leaders pay lip service to the climate crisis, while continuing to expand fossil fuel extraction.  The story very much brings to mind the oh-so subtle satire of Doom Eternal, with capitalists reacting to the discovery of Hell by looking for ways to directly profit off of it.

Unfortunately, this goes beyond increasing the already monumental task of ending fossil fuel use, because while the industry has developed ingenious high-tech methods for accessing and extracting fossil fuel deposits, the wealth that has come from that has been used to shield them from ever having to figure out how to clean up after themselves. One part of this is the criminal laziness was probably best highlighted by the pathetic industry response to the Deepwater Horizon disaster in 2010, and the demonstration that there had been no advances in oil cleanup in the decades since the Exxon-Valdez disaster, and BP’s oil spill response plan for the Gulf of Mexico included species like walruses and sea otters. The other part tends to be less dramatic, but could end up being as destructive as the more attention-grabbing spills and leaks – abandoned extraction sites:

How many of them are there, and where are they located?

A recent investigation by Reuters estimates that the United States could have more than 3.2 million orphaned and abandoned wells. Some states have a few hundred; others have a few thousand. And some have a staggering number of them: Pennsylvania reportedly has more than 330,000 of these wells within its borders.

“Orphaned and abandoned oil and gas wells are located everywhere,” says NRDC senior advocate Joshua Axelrod. “They can be in the middle of a forest, in backyards, in farm fields, even under sidewalks and houses.” Basically, they are anywhere that oil and gas development has taken place—at sites of large-scale operation spread out over many acres as well as single-well outfits on tiny parcels of land.

Why are they so dangerous?

Simple: Because they leak. Among the chemicals that can seep out and contaminate air, soil, or groundwater are hydrogen sulfide, benzene, and arsenic. Even the smallest leaks can adversely affect the local environment if they go unaddressed or undetected for many years.

Most alarmingly, though, these wells emit a lot of methane, an odorless gas that can seep into nearby buildings (a home, school, or office, for example) and pose major health hazards. When concentrated in enclosed spaces—such as a basement or a bedroom, for instance—methane will take the place of oxygen in the lungs and can cause weakness, nausea, vomiting, and convulsions. Long-term methane poisoning can even be fatal. And methane, of course, doesn’t just make people sick: It’s also highly explosive. In 2017, two men were killed while installing a hot water heater in the basement of a home in Firestone, Colorado, that had been built adjacent to an oil and gas field. When the neighboring petroleum corporation restarted a well that had been dormant for a year, a damaged flowline filled the basement with gas, which ignited into a fireball that destroyed the house in an instant.

I suppose it’s a good thing that we’re aware of this problem, and know where all of these abandoned wells are. It’s also helpful that many of them are on dry land, which reduces the resources required to actually seal them off. There’s another problem that, while probably less severe, is also less well-mapped, and is pretty much all under water – sunken ships. 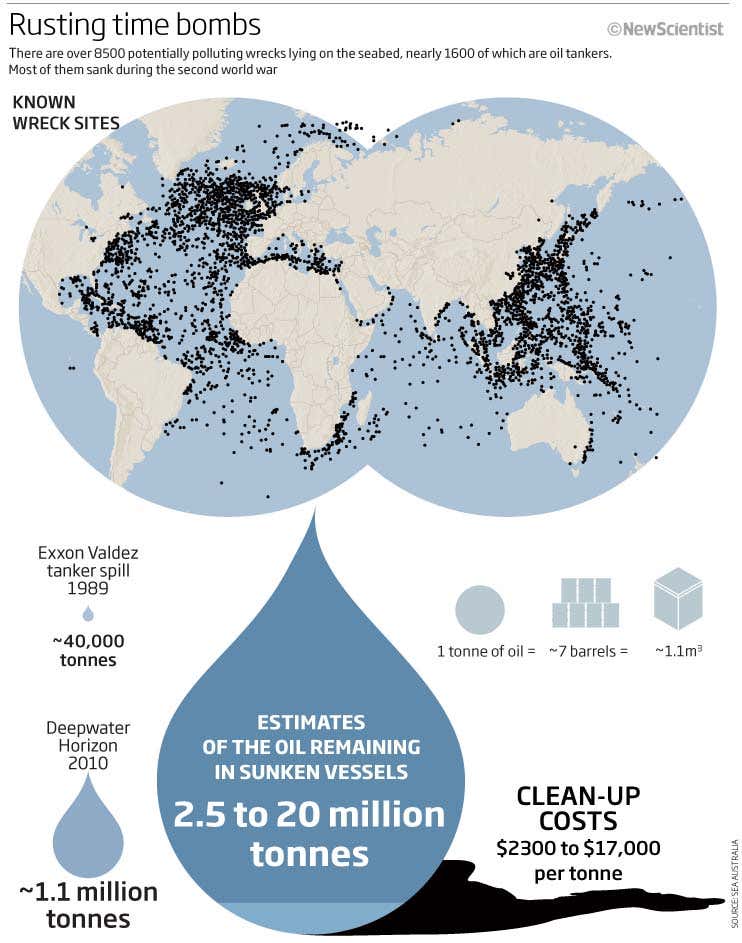 I’ve long believed that the climate will continue warming for generations to come. If we’re going to survive, we’re going to have to find a way to exist as a part of global ecosystem that is, at least to some degree, actively managed. It’s not that I think nature needs us to “fix” it, but rather than we desperately need a healthy and diverse ecosystem for us to survive and thrive. That means that we can’t just stop doing the bad things – we also have to clean up after ourselves and our predecessors. This is work that is vital to our future, and it’s work that will take at least as long to do as it took to make the mess.

I also don’t think it will be profitable. The closest we could get to dealing with this problem in a capitalist society would be to provide government incentives. There will be some forms of cleanup that could be directly profitable, like “mining” raw materials from various kinds of trash, but that won’t be the case for everything that needs cleaning up, and the history of that economic model makes clear that the people forced to engage in that dangerous work will be treated horrifically.

We have a very long way to go before we can consider ourselves responsible residents of the planet. The cleanup will take generations. It will take far longer if it’s still limited by obsession with profit and disdain for human life, but no matter how we go about it, it will be the work of multiple lifetimes. In my lifetime, I’ll be content if I see us change to the point where those doing this necessary work are treated with the dignity and respect they deserve – it’ll be a good sign that we’re on the right track.

Thank you for reading. If you find my work interesting, useful, or entertaining, please share it with others, and please consider joining the group of lovely people who support me at patreon.com/oceanoxia. Life costs money, alas, and owing to my immigration status in Ireland, this is likely to be my only form of income for the foreseeable future, so if you are able to help out, I’d greatly appreciate it. The beauty of crowdfunding is that even as little as $1 per month ends up helping a great deal if enough people do it. You’d be supporting both my nonfiction and my science fiction writing, and you’d get early access to the fiction.

Some More News about justice and stuff, straight from the Millennial Id » « Possible progress on identifying the causes of “Long Covid”