Wordle is mastermind times the alphabet.

Wordle was invented in October 2021 by Josh Wardle.  Filmmaker Tim Wardle is his brother.  Although Wardle was born in Wales, I doubt he has any family connection to John Wardle (a/k/a Jah Wobble, ex-Public Image bassist).

Grant Sanderson, creator of youtube channel 3Blue1Brown, recently made a video on wordle, seen below.  He did a statistical analysis showing that a thinking person with a good grasp of English (and perhaps access to the lexicon used by the game), should take four guesses on average to find the word. Others have written strategies on solving wordle puzzles.

As the preview picture shows, Sanderson suggests the word CRANE as the best opener.  It’s a good choice for multiple reasons.  First, all five letters are among the thirteen most common letters (ETAOINSHRDLCU) which make up about 84% of letters used in English.  Second, some of the letters are in positions that they occupy in many words (e.g. silent E at the end, R in many consontant digraphs).

I disagree with him only on the initial words to choose.  My default first and second words when playing are SHARE and TONIC.  They contain ten unique letters (all from the thirteen most common), are again in commonly found positions, and the first uses a digraph.

I’ll assume everyone reading knows about Mastermind, a game commercialized in 1970 but based on the game Bulls and Cows from the 1960s.

Optimal strategies for playing mastermind have been written.  Two of those I found (from Stackexchange and from Wolfram) say the optimal first guess is two and two (e.g two red and two yellow).  They claim to defeat any mastmind code within approximately five moves.

I disagree on the algorithm, but agree that almost every code can be solved in five attempts, maybe six.  My optimal uses three and one (e.g. RRRY), which eliminates one possible variable, yet still allowing two colours on the first guess.

Below is my strategy when the first guess produces less than three correct colours.  (If you get more than three, apply the same strategies.)  There are only five possible cases and thirteen outcomes, which makes them easy to remember.  As with the 3Blue1Brown video above, all information is good information when solving puzzles.

Where I name colours below, you don’t have to choose them.  I stayed with one colour to avoid writing multiple examples and to make it clear. 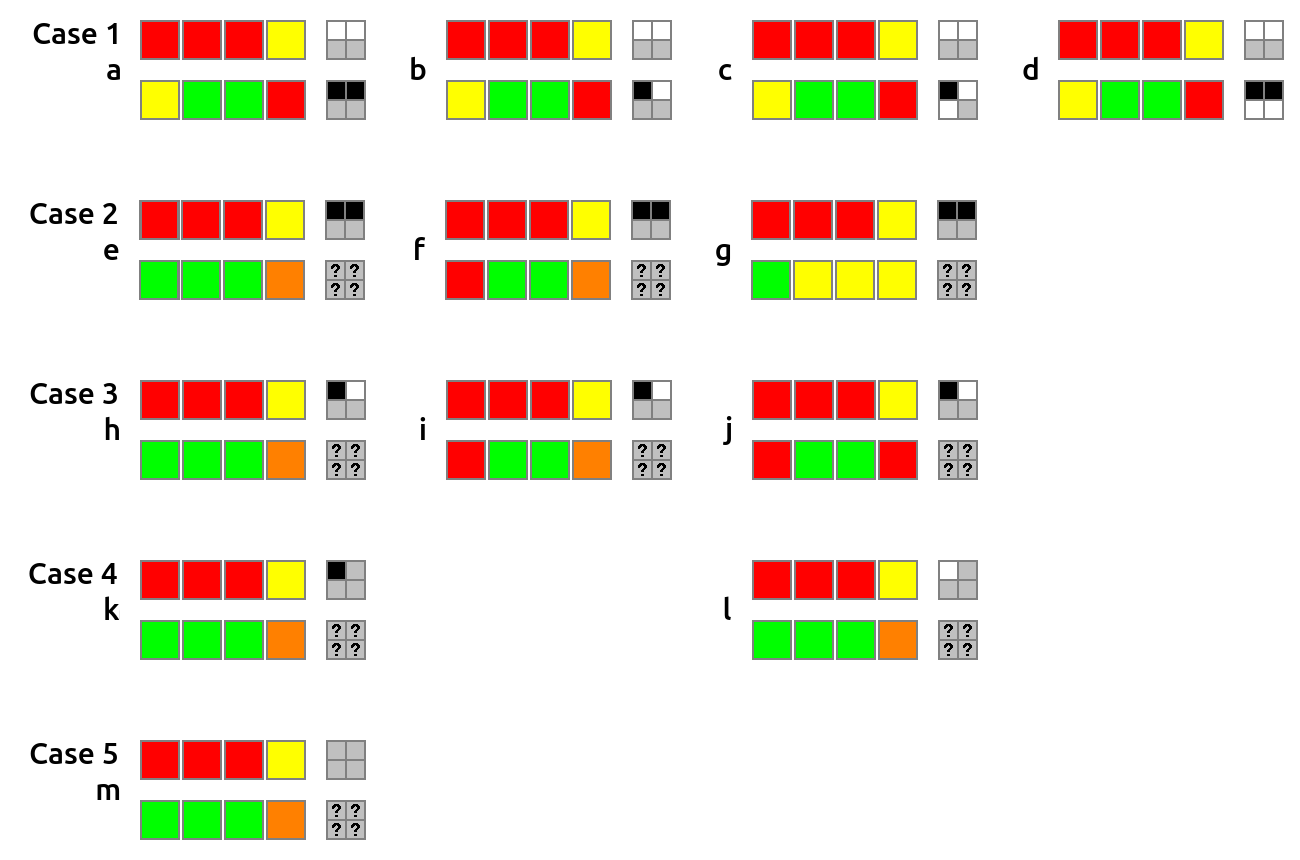 This result proves there is only one red and in the fourth position, and at least one yellow. Place a yellow in another position and add two green.

a) Two black means yellow is in the correct positions; there could be 1, 2, or 3 yellow.

b) One black and one white means one or two yellows in the other positions.

c) One black and two white means green is in the first position and one or two yellows.

d) Yellow is either in the second or third position.

g) Use three of the single colour from the initial guess.

Case 3: One in the correct position, one correct colour.

h) Do as (e), combine information.

i) Do as (f), combine information.

j) Use two reds and a new colour, one in the fourth position.

Case 4: One correct colour, correct position or not.

Eliminating two colours is good information.  They can be used as spacers, deliberate wrong answers to minimize variables.

It’s Time To Name And Shame: Visit convoytraitors.ca » « Their Ignobel Prize Awaits: The study of emojis