In December, I posted about the demise of Creative Computing in December 1985.  And in the item, I said I found that out while researching something else.

Well, here it is.

In January 1976, Creative Computing published code for the computer game Chase, or Robots as it’s sometimes known.  It was not a new game at that point.  Its creator is unknown, but the game dates as far back as 1971 or even 1970, making it fifty years old. 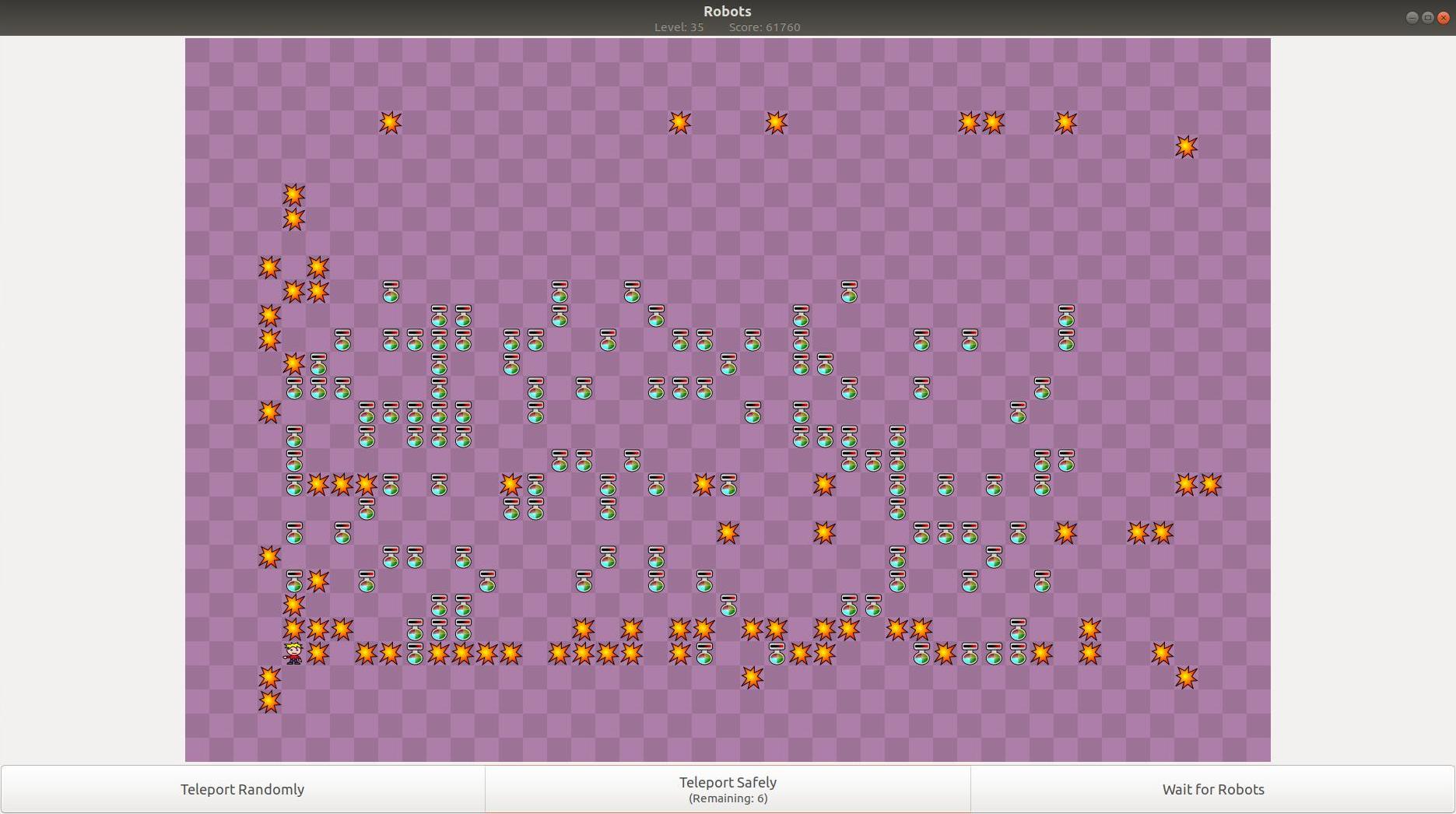 In Chase, you are a human being chased by robots that are trying to kill you.  Why are they trying to kill you?  Be. . .because they are, that’s why!  You can move in eight cardinal directions or (if you have any available) teleport to another location.  And with each move, the robots will move ever closer towards you.  In the screen capture of the version I play on Ubuntu (seen above), you have two teleport options if they get too close: randomly (which may get you killed, but unlimited use) or safe teleport (up to ten per level).

Your goal is to kill all the robots on each level, either by luring them to crash into each other or into piles of broken robots.  If you are strategic, you can use collisions to create walls and safe spaces.  If you feel you are in a safe place (see image above, bottom left), you can hit “last stand” (or “wait for robots”) and the remaining robots will charge at you.  For every robot destroyed via “last stand”, you gain one safe teleport, up to a maximum of ten.  This is the only way to earn them.

Chase is a simple but fun game, one of those programs people learn when they start out programming because it teaches array handling, keyboard inputs, modding, and other important skills.

As it turns out, Chase may be the most influential computer game in history.  It has three distinct family trees of descendants with more than a hundred games resulting from it.

Below the fold is the first of the three family trees.  Two more posts will come soon.

Chase does not include shooting, but it directly influenced the creation of Berzerk in 1980, of players escaping from killer robots.  In Berzerk, you play a human/humanoid trying to escape levels of mazes.  Different coloured robots have different speeds and rates of fire, increasing in difficulty as the game progresses.  If you stay in a level more than twenty seconds, a yellow ball called Evil Otto will appear and come for you.  The robots can be shot and destroyed (or kill themselves by colliding with each other or walls) but Evil Otto is indestructible.  You must head for an exit immediately.

In Berzerk, you have only one joystick and one fire button, and you can only shoot in the direction you were last moving towards.  Many players found this limiting, including other game designers.

Berzerk was the inspiration for Robotron 2084 in 1982.  You play as a humanoid trying to save the last human family from a wide variety of robots trying to kill them in mass genocide.  (Whether Robotron 2084 had any influence on the 1984 film Terminator, I have no idea.)  Robotron includes two joysticks, one for movement and the other for firing, allowing the player to move and shoot independently.

Other “shoot ’em up” games existed and were made, but most were rail shooters (e.g. Space Invaders) or tube shooters (e.g. Tempest, Gyruss) or scrolling games that moved up the screen or to the right. Chase, Berzerk and Robotron were all multidirectional, but all stayed within a limited play space.

Other similar games followed, most notably Smash TV (1990) which was a smash success in arcades.  (Eugene Jarvis created both Robotron and Smash TV.)  Smash TV was a mock TV game show, taking elements (and taglines) from two films, Robocop (1987) and The Running Man (1987).  It was ultra-violent, with plenty of simulated blood and crude humour which was still acceptable in the 1980s.

Many other multidirectional games followed, but thanks to increase RAM and hardware capabilities, they improved not only in sound and graphics, but also complexity, storyline, and playfield.  Some reached the level of “sandbox games” (i.e. almost a full world).  Among Chase’s other descendants:

And that’s only a partial list.  Part two is coming soon.

Maybe It Was Too Good To Last: Taiwan has its first mass outbreak » « Recently Seen: More amusing pictures