Protesters in Montreal worked to bring down the statue of John A. MacDonald, the first Canadian prime minister.

A group of activists toppled a statue of Sir John A. Macdonald in Place du Canada in downtown Montreal on Saturday afternoon in the aftermath of a protest calling for the defunding of the police force.

A handful of people climbed the monument, tied ropes around the statue and held up banners before unbolting it and pulling it down. The falling statue’s trajectory caused the head to fly off and bounce onto the cobblestones below. A video posted to social media captured the moment. 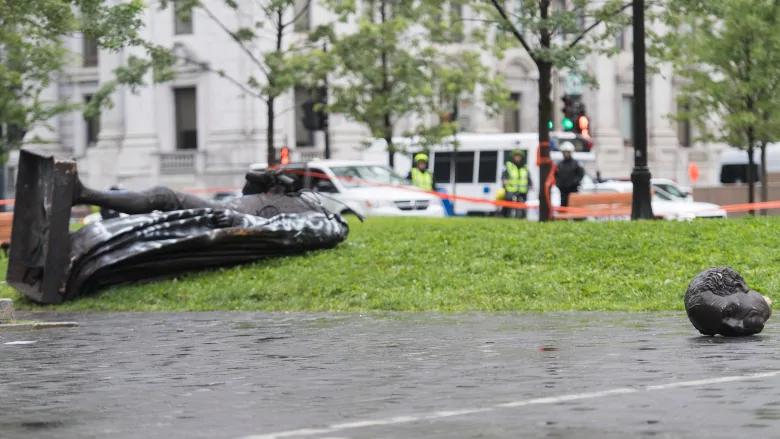 Good.  People may wax poetic about MacDonald as a “father of confederation”.  But the reality is he was a drunk, a racist, and a perpetrator of genocide against the First Nations people.  His treatment of Canada’s indigenous people, the lynching of Louis Riel, Chinese immigrants (the racist “Chinese Head Tax”), his taking of bribes among other crimes makes him a national embarrassment.

Here is what Sir John A. Macdonald did to Indigenous people

Of course, all this was happening in an era that was comparatively brutal almost everywhere

“I have reason to believe that the agents as a whole … are doing all they can, by refusing food until the Indians are on the verge of starvation, to reduce the expense,” Macdonald told the House of Commons in 1882.

It’s one of the most damning quotations ever attributed to Macdonald. And yet, in the parliament record it’s immediately followed by an even more damning comment as the Liberal opposition benches accuse Macdonald of not starving Indians enough.

“No doubt the Indians will bear a great degree of starvation before they will work, and so long as they are certain the Government will come to their aid they will not do much for themselves,” said David Mills, who had served as minister of the interior under the Liberal government of Alexander Mackenzie.

When Macdonald took office for the second and last time in 1878, the plains were in the grip of what is still one of the worst human disasters in Canadian history.

Dustbin Trudeau has spoken out against the improvement of the statue, blathering about history and glossing over their actions.  The writer linked below mentions Dustbin’s own participation in that glossing, but his own father’s crimes are going to be topic matter in the next six weeks with the fiftieth anniversary of the October Crisis.

Licia Corbella: Is Trudeau worried about cancel culture coming after his father’s legacy?

Here’s a damning but accurate opinion piece on MacDonald:

Ten crimes of John A. Macdonald

Half Measures: Now what about the false arrests and convictions? » « Time’s Up: The end of an era in Formula 1