Amy Dyess is a lesbian from Seattle.  She first rose to prominence after writing a “TERF is a slur” article that went viral among hate groups (e.g. TERFs).

The ‘gender critical’ feminist movement is a cult that grooms, controls and abuses, according to a lesbian who managed to escape

Back then [October 2018], Amy was connected to an international network of powerful lesbians.

She believed, like many people in the “gender critical” feminist movement do, that the lesbian community to which she belonged was under attack from trans-rights activists.

Amy, who is based in Seattle, doesn’t believe those things any more. Looking back on her time in the “gender critical” feminist movement, she is unequivocal: it’s a cult.

A cult that groomed her when she was vulnerable and sleeping in her car; a cult that sought to control her, keeping tabs on her movements and dictating what she could and couldn’t say; a cult that was emotionally and sexually abusive towards her.

While Amy was being told by influential lesbians that her voice was important, she had also just lost her marketing job and was living in her car.

“Mentally, I was in a vulnerable state,” she says. “I was going through a hard time.”

For the first time, Amy’s voice breaks a little as she recounts what this period of her life was like. “I felt like everybody knew. And they just would exploit. Instead of helping, they would just keep taking from you.”

“They wanted you to be unstable,” she pauses. “That’s something I noticed.”

It was at this point that the emotional and sexual abuse she experienced at the hands of the gender-critical movement was at its worst, Amy says.

Another pause. “The more stabilised I got, the less they could control me. And they try to control you.”

One of the things some people have a hard time believing about anti-Trans bigots is their willing and close association with far right wing media and groups.  I knew that TERF bigots like Julia Beck appeared on Fox Nuisance, that Posie “Nosy” Parker had appeared on white supremacist podcasts.  What I didn’t know until today is how close they are connected.

I knew the UK’s “LGB Alliance” is an anti-Trans hate group that has been denied access to funding sites because of its hate speech.  But it turns out they have a chat forum called “Spinster” that is part of the “alt-right” site Gab, and both groups collaborate.  UK neo-nazi groups have openly spoken in support of LGB Alliance.  When asked to disavow neo-nazis, they refuse to.

There is a disturbing image below the fold, separated so you only see it by choice.

This image was taken from Spinster, a mock up of their t-shirt, a terrorist weapon and a neo-nazi mask. 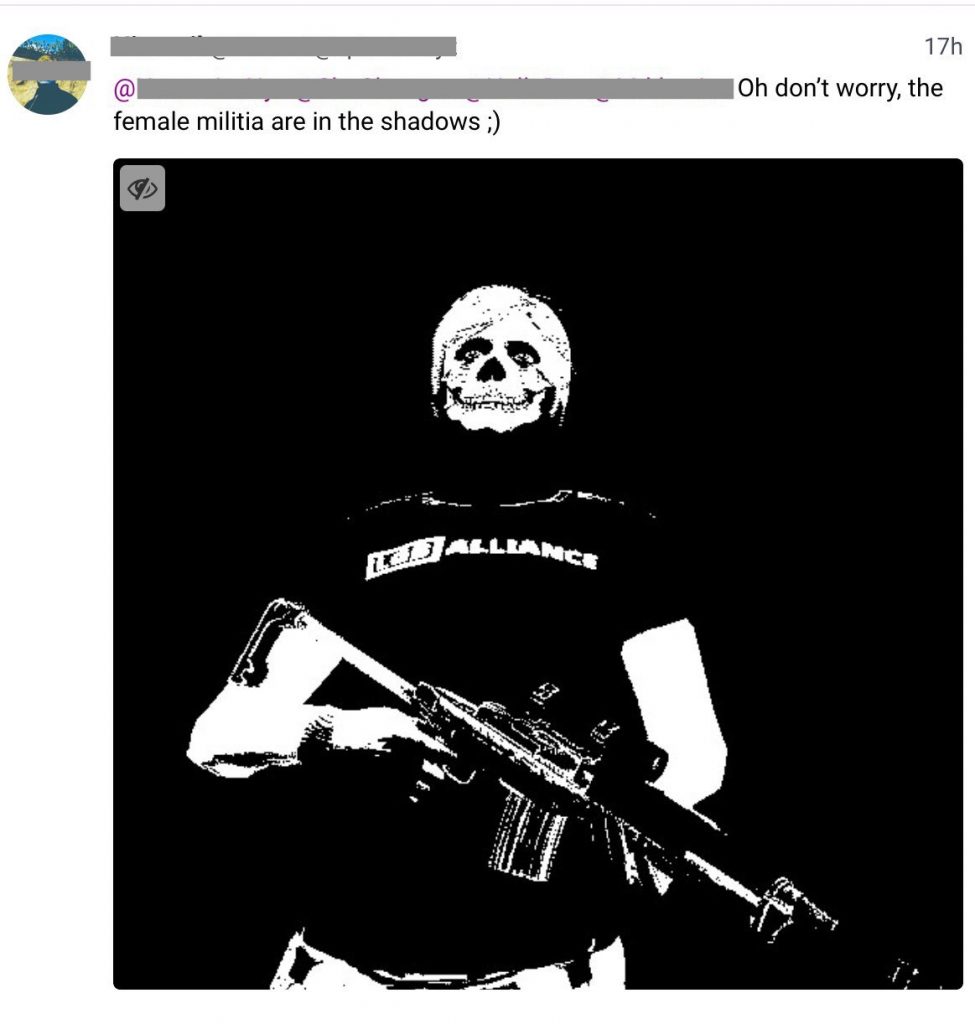