I don’t listen to Lizzo and rarely watch basketball (unless it’s a college team playing a full court press), so her appearance at an LA Lakers game was unknown until mentioned in several feminist groups.

The “Truth Hurts” singer rocked a black T-shirt dress with a cutout that showed off her thong as she twerked on the Jumbotron.

Many people have a something to say about Lizzo’s latest sartorial choice.

The 31-year-old singer wore a black T-shirt dress with a spicy twist to the LA Lakers and Minnesota Timberwolves game over the weekend: a cut-out that revealed her black thong. And, in true Lizzo fashion, she twerked to her heart’s content while at the game.

When the twerking hit the Jumbotron and then Twitter, fans and critics alike came out in droves to offer their thoughts on her outfit and antics.

Yes, negative comments galore made by nosy parkers talking about something that doesn’t affect them whatsover.  People moaned and whined after the game, “Think of the children!” They would have commented during the game, but they were too busy looking at the 50kg Laker Girls dancing around the basketball court at halftime, wearing hot pants and crop tops with exposed bosoms.

More text below the fold.  Yes, the picture you’re expecting is there, and so is another.

Aurielle Marie wrote an insightful piece on Teen Vogue about her and society’s reactions:

I’ve worked to overcome my own body shame, by listening to fat-positive experts like the brilliant Sonalee Rashatwar and Ericka Hart. I fill my Instagram feed with diverse bodies by following Ashleigh Shackelford, TheBodyIsNotAnApology, Naomi Chaput, Kelly Augustine, and Sesali Bowen. Instead of weighing myself, I focused on activities that fed both my body and my spirit. The shame that I fought to put down is, I suspect, the same energy driving the outrage over a butt-baring outfit Lizzo wore to a recent LA Lakers game. Sitting courtside, she rocked a black t-shirt dress with a hole cut in the back, exposing her butt cheeks and a black thong. During the game, the star got up to twerk when her hit Juice came on, celebrating herself and her hit record.

The image of Lizzo shaking her bare ass at a basketball game quickly went viral, and with that came heaps of criticism. I watched hundreds of people weigh in on Lizzo’s right to wear clothing she owned in a public place, a right no one has the authority (or, frankly, the funds) to bestow or deny. Who the f*ck does Lizzo think she is?, people asked, she knows better than to show her ass like that. Another commented Why do bitches like Lizzo think they can wear whatever they want? Questions that are violent, dehumanizing, and so familiar.

Immediately, discourse on social media became anti-Black and fatphobic. Sure, most of us don’t wear dresses that expose our ass via a circular cut out. But if it were a slim white woman wearing the outfit, would we be having the same discussion about her worth, her morals, and her value?  Would people have asked who “bitches like” that think they are? What this discussion on large bodies is and has always been missing is a reality check: People are not mad that Lizzo showed her backside, they hate fat bodies and the Black girls housed in them. And they hate us even more when they can’t control us, limit our social mobility, or dictate when and where and we are allowed to celebrate who we are and how we look. We look good as hell, and we know it. That’s exactly what pisses folks off.

When Miley Cyrus exposed her bottom in several places, nobody said a word except those who claimed “that white girl has curves”.  Bamboo has more curves than Miley Cyrus does.  Hell, *I* have more curves.  (Would I do something as outrageous as Lizzo?  That’s between me and my photo collection.) 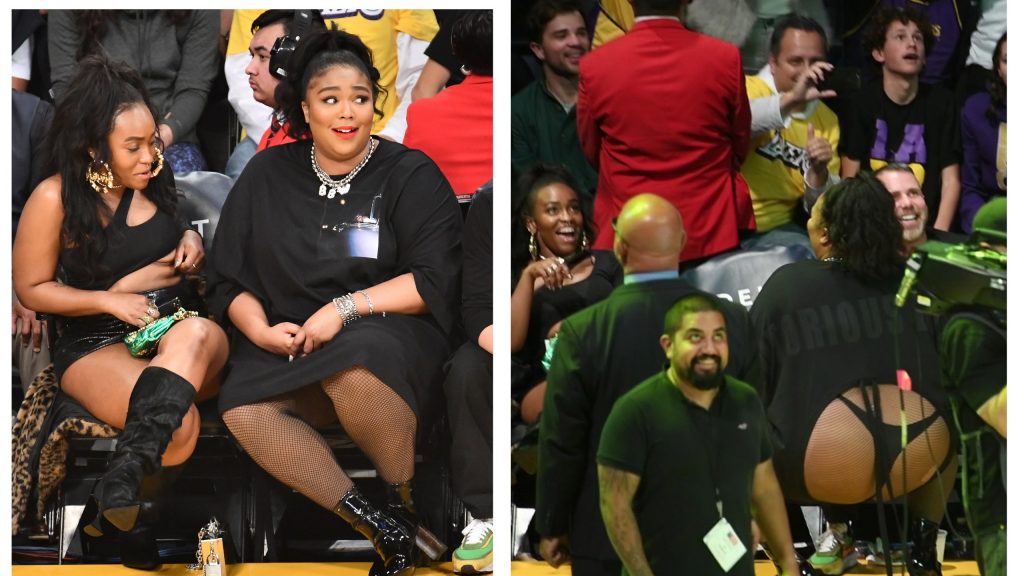 I saw this rebuttal meme below in the group Feminists Without Religion.  It’s a great touché to all those getting touchy about Lizzo’s performance: 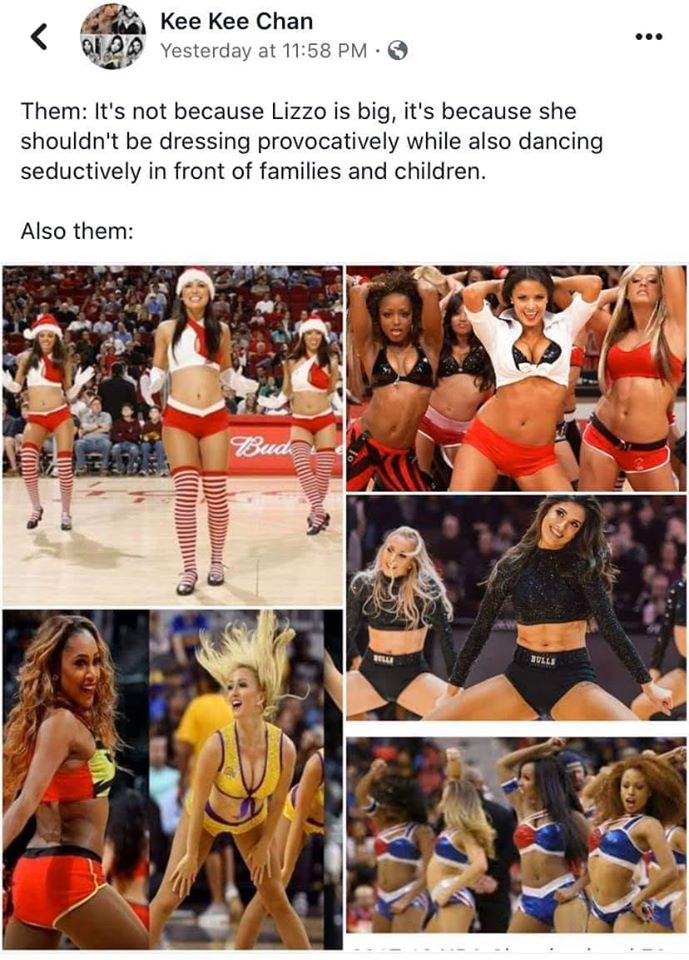 I hope this starts a big conversation about how society polices the bodies of not just Black women and “large” normal bodies, but also women and girls in general and dress codes at schools.  Stop pretending this is about “morality” and admit it’s creepy men wanting their fantasies fulfulled and narrow minded attitudes catered to.

I readily admit I had the same failings and ignorant racist reactions in the past.  Changing learnt attitudes is difficult and takes time, but it’s a necessity and an obligation.  People’s existence is not the crime, ignorant attitudes are.  The “ideal body” is as unattainable and non-existent as any “god”.