Vancouver is planning to do what other cities have done, like Taipei and Seoul: tear down viaducts and create spaces for people instead of cars. Viaducts are built with a plan, and very rarely are they built on empty land.

Vancouver’s were built in the late 1960s and early 1970s under the rightwing Social Credit government (commonly known as “socreds”).  A freeway project was cancelled in 1972 both by public protest and the short lived NDP provincial government.  The Socreds were cut from the same cloth as the rightwing extremism of today, but doing it in the 1960s to 1980s.  (Pardon me for too many political posts lately.)
In order to enact their “urban renewal” plan, the Socreds had to forcibly remove the people living in the neighborhoods around False Creek.  And which neighborhoods were they?  Poor and non-white people, of course, including the African-Canadian community.  (I didn’t know that Jimi Hendrix’s grandmother lived in Vancouver.  Cool.)  Funny how urban planning just happens to be where the most vulnerable and least powerful are, and why it was designed for white people living in middle class suburbs to drive into Vancouver for work.

There are pictures of the current and proposed sites below the fold.

The viaducts have always been an eyesore, a scar on the landscape around False Creek.  Rogers Arena is between the viaducts, and BC Place Stadium on the left.

The proposed changes would be better if they also got rid of all that ugly concrete on the left.  It ruins the view of the North Shore mountains. 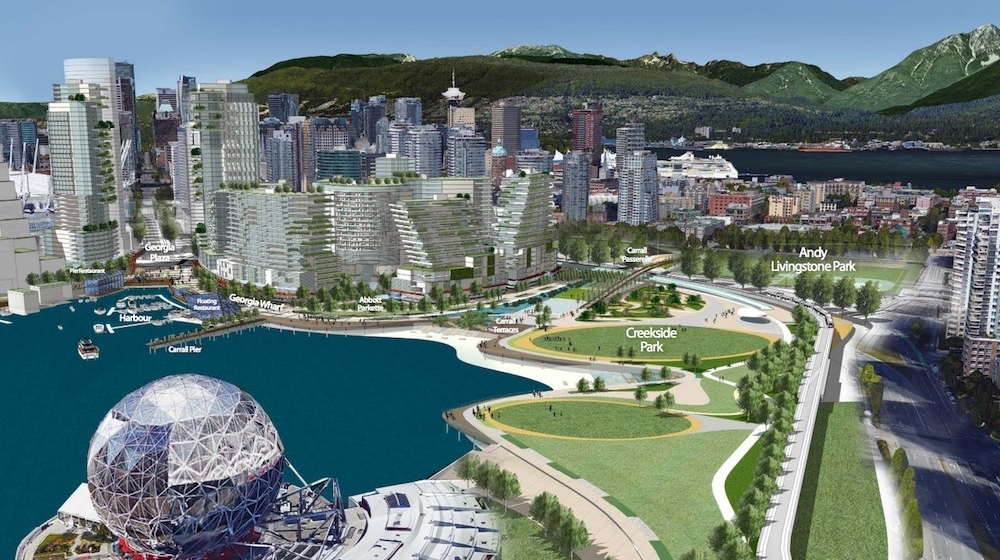