In 2004 he was named the Greatest Canadian ever, primarily for his founding of Saskatchewan’s socialized medicare plan that made health care affordable and save countless lives.

CBC: The Fight for Medicare

In the early 1960s, Saskatchewan doctors reacted with anger and frustration, culminating in a bitter strike when the province tried to bring in Canada’s first universal health insurance plan.

In Saskatchewan, Premier Tommy Douglas and his socialist party, the Co-operative Commonwealth Federation (CCF), had been in power since 1944 and had been the first government in the country to provide hospital insurance for its citizens.

After 23 days on strike, the Saskatchewan doctors returned to work. But hostilities remained long afterwards; patients resented their doctors’ desertion and doctors continued to object to government involvement in medical care. Nevertheless, a 1965 survey found that most doctors favoured continuing the plan.

The Saskatchewan government had opened the door to universal health care. Within ten years of the Saskatchewan strike, the entire country was covered by medicare.

Many resented socialized medicine at first, but it’s part of what defines Canadians today and we’re better off for it. 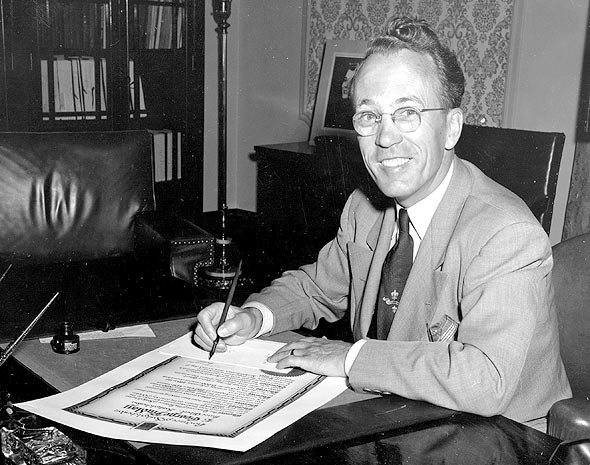 Douglas was elected to the Saskatchewan parliament in 1935 as member of the Co-operative Commonwealth Federation (CCF), a socialist party. He was named party leader in 1941, and from 1944 to 1961, the first democratically elected socialist government in North America.  After 1961, he left to be federal leader of the socialist New Democratic Party, a reformation of the CCF.

Another of Douglas’s proudest momemts was being the strongest opposition and voice of reason against Pierre Trudeau’s use of the War Measures Act during the October Crisis of 1970 (yes, one year from the 50th anniversary).  Trudeau turned Canada into effectively a police state, a massive overreaction to the actions of the Front de libération du Québec (FLQ).

Canadians who remembered our own history cringed when the US overreacted with fascism like the “patriot act” because we had seen it before.  But unlike the War Measures Act which was eventually rescinded, the “patriot act” has become permanent law (renewed in 2019).

Douglas was not without his flaws.  In the 1930s, he advocated eugenics, but changed his mind after a 1936 trip to pre-war Nazi Germany and witnessing the growing attitudes towards the weak.  That’s what good leaders do: change their minds when new facts appear, not permanently wed themselves to ideologies.

Forced Out And Paved Over: There’s nothing gentle about gentrification » « Get Out And Vote: Sixty hours until the polls close, as I write