March 2017 marked the 200th anniversary of the Velocipede (aka Dandy Horse), the first bicycle.  While it was a simple construction (two wheels with a connecting bar to sit on and push the ground with your feet), it was the first non-motorized transport that didn’t involve animals. 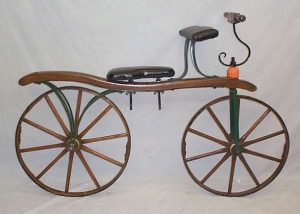 Bicycles played a huge role in the emancipation of women, allowing them to wear more functional clothing.  Bicycles allowed women to travel, but Victorian era clothing would be impossible on a bicycle.  Shorter skirts and pants for women were necessary and became socially acceptable clothing in the 20th century.

One hundred years ago, Alice Hawkins, a suffragette, cycled around Leicester promoting the women’s rights movement, causing outrage by being one of the first ladies to wear pantaloons in the city. During the fight to win the vote the bicycle became not only a tool but also a symbol for the emancipation of women.

The American civil rights leader, Susan B Anthony, wrote in 1896:

“I think [the bicycle] has done more to emancipate women than any one thing in the world. I rejoice every time I see a woman ride by on a bike. It gives her a feeling of self-reliance and independence the moment she takes her seat; and away she goes, the picture of untrammelled womanhood.”

Bicycles have also played a huge part in warfare.  Forget the Swiss, think Britain, Nazi Germany, Japan (some called it “bicycle blitzkrieg”), Vietnam in its defence of the country, and the US during its illegal invasions of Iraq and Afghanistan.  They have long been used as fast transport for ground troops, messengers, and silent assaults upon enemy positions.

On October 13, 1967, Jack Salisbury, a New York Times reporter, testified before the Senate Foreign Relations Committee, saying, I literally believe that without bikes theyd have to get out of the war. He had seen first hand in North Vietnam how both the Viet Cong and the North Vietnamese Army relied upon the bicycle to supply their troops. Senator Fulbright responded, Why dont we concentrate on bombing their bicycles instead of the bridges? Does the Pentagon know about this? According to reports, the room erupted in laughter at the idea of American bombers hunting bicycles.

US politicians may have been laughing, but the generals weren’t.  They knew.

It wasn’t just in the 20th century.  In the late 19th century, the US’s 25th Infantry Bicycle Corps performed a 1900 mile test to prove the viability of the bicycle for troop movement in warfare.  This test also played a role in acceptance of black soldiers in the US military.

In June of 1897, the all-black company of the 25th Mobile Infantry, under command of a white lieutenant and accompanied by a medic and a journalist, embarked on a journey across America’s heartland — from Fort Missoula, Montana, to St. Louis, Missouri — to “test most thoroughly the bicycle as a means of transportation for troops.”

Their trek would span 41 days and 1,900 miles and pit the men against sandhills, the Rocky Mountains, rain, snow, poison, and more. Decades before Dr. King had his famous dream, these men were sweating together, bleeding together, and biking together as a team.

Their trip proved two truths that we should hold self-evident today: 1) All men are created equal; 2) All men are nowhere near as tough as they were in 1897.

Two-Wheeled Warriors – A Brief History of Bicycles on the Battlefield

Bicycles are the transportation of the future, not the past.  Environmental issues are forcing cities and countries to seriously rethink personal automotive transportation and put the focus on mass transit.  The “last mile problem” (i.e. not everyone lives or works next to transit) is why the car mentality persists.  But with problems like pollution and climate change, rail becoming more accomodating to bicycles, cities building more bike lanes, and folding bicycles becoming more reliable and cheaper, the days of the car may be numbered.

Electric bicycles are as viable as electric cars.  As battery power storage improves and batteries shrink in size, why move a one ton car when you can move a 30kg bicycle with a far smaller battery?  For those with limited endurance or physical mobility but can still walk, an electric bicycle is more than sufficient for travelling locally without reliance on vehicles or public transit.  Electric bicycles offer speed and distance (up to 24kmh and ranges up to 50km) without requiring licenses or registration. For those who lose (or should lose) their licenses due to an inability to drive safely anymore, it is a viable alternative transporation.

There is a lot of snobbery towards bicycles and cyclists, plenty of unthinking people with anti-bicycle attitudes who should never be allowed to drive.   The reality is, bicycles aren’t “outdated technology”, they are not a “hindrance to traffic”.  Bicycles are the most efficient mode of transportation in terms of power to distance travelled.  They aren’t just here to stay, they are on the rise.

And if you still don’t agree or like bicycles, I say on yer bike.