On Saturday December 10th in Taipei, Taiwan, the LGBTQIA community and its allies held a rally in favour of marriage equality.

Two hundred and fifty thousand people showed up to defend and advocate human rights and equality, showed up to oppose hate and ignorance. 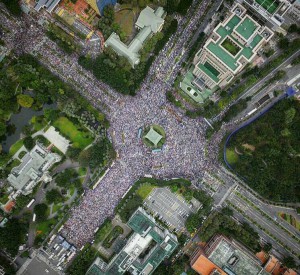 (The drone photos come from facebook, the protest’s page and a friend’s.  I’ll publish my street level pics in another post.)

The religious bigots spent weeks in preparation of their anti-LGBTQIA protests and could barely manage 20,000 at one feeble protest, and were likely shipping people place to place and other protests to make their numbers appear larger.  (I’m intentionally quoting “lifesite”, a rightwing US hate site, because they would want to inflate their numbers to further their bigoted cause.)

Saturday’s pro-equality protest was first organized last Monday, and we showed up with 250,000 people.  Even if it was “only 75,000” as Taiwan’s police claim, that still dwarfs the bigots’ feeble attempts.  And then there’s the LGBTQIA pride parade in Taichung next Saturday, which will mostly include new people, not those who showed up in Taipei. (I wish I had time to attend that one, but I have to work that day.)