You’ve probably all seen this Laurie Penny piece, detailing the problems with geek/nerd culture, entitlement and so forth. I’ve long been a great admirer of Penny’s work and she’s done a lot for me in terms of understanding and combatting male entitlement and sexism.

One of the first responses I got when Tweeting Penny’s piece was a rando complaining it was yet another “white woman femsplaining” to men. I thought, as someone who is neither white nor a woman, I’d outline why I support Penny’s general position and want us to oppose nerd gatekeeping and general manosphere attitudes.

Like a cliche, I unfolded into puberty gripping a game controller, bullied, shy, and lonely. I had more interest in reading than I did in other people, despite desperately wanting to fit in. Yet, it seemed easier to complete Resident Evil’s ludicrous puzzles than speak to girls. Since I had a funny name and a strange accent, I didn’t fit in with any one group: non-Muslim friends couldn’t invite me out because of drinking and no pork products; Muslim kids didn’t like my boredom or open disdain for religion. And on it went, throughout almost all of my school years.

I was a shit to girls as a teenager, as I think almost all teenage guys probably are. All I really had were my fantasy books and games and alien shooters. My parents divorced, I had major health issues and so on.

More recently: Games themselves have been an essential way to combat chronic pain, after I found myself literally walking with a cane due to an illness no one really understands (it made my legs look like zombies had had a bit of fun). I literally earn my livelihood from writing about and studying games and games culture (among other things of course). I wrote a mini comic and one of my dreams is to do graphic novels.

I hate the term nerd and geek. Where once maybe it demarcated activities a select few were interested in and obsessive about, we live in a world of celebrity scientists and well-funded science shows; big comic book films topping the box office; the foolish and boring Star Wars franchise continuing to exist (blegh); video games making more money than a lot of Hollywood films. Nerd culture has blossomed and been amalgamated into general culture. It’s not strange to like Superman or play Dragon Age; it’s kind of expected.

Nonetheless, like someone who has great knowledge about cars or has a career in the automotive industry, some of us are more invested than others. But that investment gives no more legitimacy to deciding who may and may not participate than a footballer denying you entrance to a match because you can’t name every player for England (they’re a team right?).

Of course: I understand that “nerd culture” – or whatever – which we can loosely call games, comics, and film were the domain of the “outcast” or the “bullied”. But isolation from the rest of the world was a bug, not a feature of that culture. Now it’s bloomed into every day life of big budget Marvel films and billion dollar game industries.

And yet we still have people – mostly men – “defending” it, gatekeeping, testing women because “why would a woman I’m attracted to be interested in “nerdy” things – unless it was to get attention, to be a slut, or… something not really ever defined?”

Gatekeepers: You are not protecting “the culture” by deciding who may and may not participate, you’re poisoning it. When the barrier for entrance is correlated to your level of sexual interest, that’s both unfair and disgusting. This is the trajectory the arrow of “you’re too pretty to be a scientist/business person/etc.” flies and you’re putting up a new bullseye. You’re the child hugging a puppy who you love so much you strangle it; you’re the gardener who drowns his plants. What culture needs is expansion and growth, which comes from freedom. With freedom comes diversity. 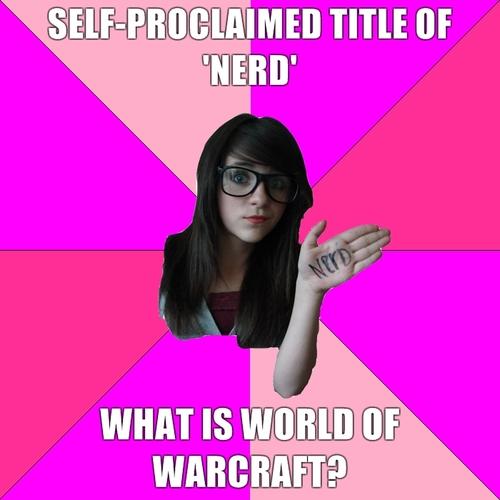 It’s not even a moral goal anymore, since gatekeepers need only face reality: games, films, comics are no longer their domain. It’s everyone’s. Thus, when gatekeeping, they’re not only being willfully ignorant – by not facing reality – but as with many acts done out of ignorance, damaging. Many, of course, don’t believe they’re harming – almost no one believes his actions are harmful or bad, otherwise he wouldn’t act that way. But again: such a view is due to ignorance – willful perhaps – in which case it’s intentional in a by proxy sort of way.

Many would attempt to convey sympathy. That there’s something that unites us or that we should find some common ground to understand these poor gatekeepers. But we’ve seen what such people do. We know how invested they are in maintaining a status quo, in deciding who is and is not welcome to be part of their culture. But, as I previously highlighted, when you make something so central to your identity, you can’t help but become a gatekeeper and arbiter of whoever else decides to use it, too.

Yet this is description, not justification.

And it doesn’t matter if they’re a minority, what matters is their passion and investment. And that’s where this gets weird…

See, we often use the term nerd and geek to also describe deep investment and knowledge about these cultures, not just the culture themselves. That’s why the bizarre fake geek girl nonsense involves testing female humans* with the smallest details of arcane knowledge… to see whether they warrant a nerd/geek cred (they never do, but that’s cos they’re icky girls). But the attitude matters too –  that investment, that time, that passion. As I’ve indicated, I have that for games – but I also have it for ethics and media and other things (I don’t have much of a social life).

But what we witness with gatekeepers and Gamergate and MRAs and other entitled men raging on the Internet at women is the same attitude: They’re nerds about entitlement, they’re geeks of poisonous causes. How are we supposed to match that? Heating up hollow causes and feeding off the misplaced outrage is a system we’ve long witnessed. So often, we’re dealing with obviously utter nonsense – men are the most oppressed, white people are under threat of representation in media, etc. – but it still requires time to respond, and response is required due to the very real consquences.

We can think Gamergate, for example, is nonsense but we still have to deal with consequences of harassment. Gatekeeping is a feature of entitlement and entitlement is very real, even if its justification is not. This is why in order to respond we need to keep propping up the goals worth fighting for: inclusion, tolerance, acceptance, support. Yet, we must also operate by dipping our feet into the rushing waters of nonsense that brings these waves crashing to the shores of the real world. It doesn’t matter whether games truly are in danger of the feminists; what matters is those feminists getting bomb threats and being chased out their homes.

When people ask why I care about gatekeeping – even though I’m not often “prevented” from entering; or care about Gamergate – even though I think it’s nonsense; or care about MRAs – even though I’m a man, I need to always point to these goals: security, freedom, safety, properties I want to see on the Internet, which means the world. I don’t want any space I have some impact on to be one where others feel unsafe because they’re not the “right” race, gender, etc. We fight for safety in many ways – but one I’m less certain of is silence and ignoring. This isn’t a call to arms or anything so noble, it’s an outline of my own reasoning for dealing so often with people my Followers shake their head at, for those so obviously wrong.

Their views are worth ignoring; the impact their actions have for harmless people is not.

The problem is that when you make something your central identity, you can't help but become gatekeeper of others who (attempt to) use it.

People have been murdered in Paris: This is what I don’t want to discuss… » « Gods that want us dead