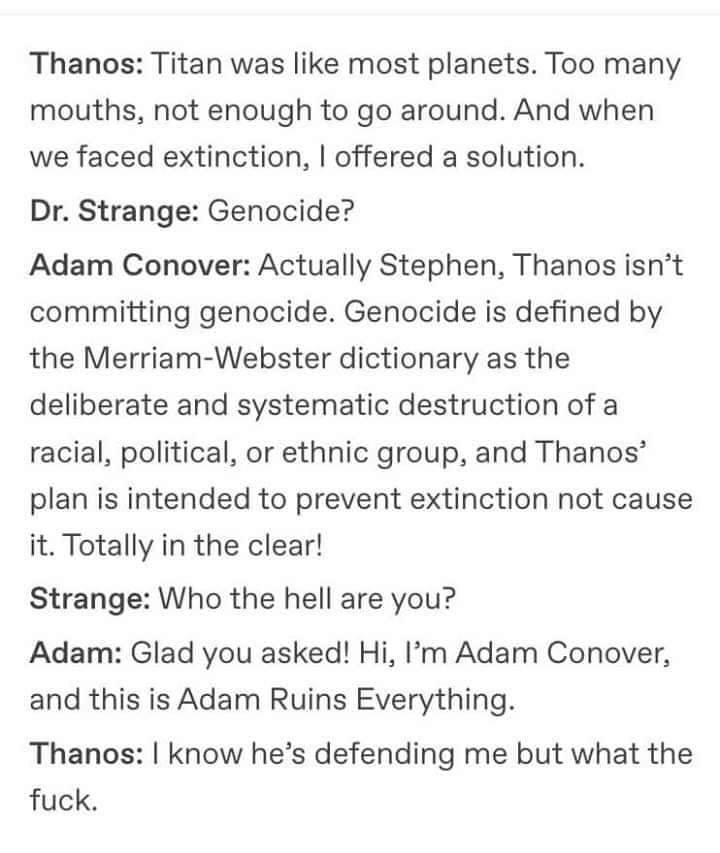 … and being me, had to continue it:

Dr. Strange: You can’t be defending him! He plans to wipe out half of all life in the universe, he’d be the greatest serial killer in existence.

Adam: Not from this. Serial killing specifically means sequential, separated incidents of murder, at least three of them.

Spider-Man (dropping in): Oh man, Adam! I love this show. Go on, serial killers are only sequential, and you can profile them like on Criminal Minds?

Adam: Not exactly. In the real world, systematic profiling has been shown to be only barely better than a guess, and it doesn’t work at all with more common dangers, like spree killers.

Thanos: I am not a spree killer! I only propose what needs to be done.

Adam: You’re half right. Your plan involves exterminating a huge number of lives with a single act, that would make you a mass murderer specifically.

Thanos: Only to save many more.

Adam: I’m afraid not. Thing is, tall, dark, and grape-flavored, you’re not the first to suggest this. Thomas Malthus wrote extensively about the population explosion and starvation you’re worried about, called the Malthusian Catastrophe, and there’s two big problems with your plan.

Adam: …FIVE big problems with your plan. But the two I had in mind were about the Malthusian Catastrophe itself, which has proven repeatedly to be a myth based on faulty mathematical assumptions-

(they stare at him)

Adam: … and two, even assuming the Mathusian hypothesis is correct, you’re making the same mistake Malthus proposed, but backwards: an arithmetic solution to a geometric problem.

Thanos: Half of everything, Conover. Half of all space and time, room for growth for-

Adam: For hardly any time at all. Your own hypothesis is geometric growth; taking Earth as a reasonable example, populations grow pretty quick. Do this, and the deaths of trillions buy you one generation, maybe two. You’d be back in exactly the same place in, oh, fifty years, tops.

Of course, the internet being what it is, a curveball appeared early on: 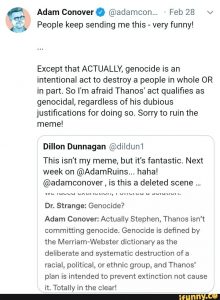 … but then, does it? I thought genocide required an ongoing campaign of destruction (qv: entire Western world) rather than a single horrifying act. Here’s hoping this is not one of those things the war crimes tribunals ever do have to seriously draw a conclusion about.