I saw that comment yesterday, and I saw that it was bad, but I didn’t have time to do it justice. Adam has done it justice; read his post. I want to say a thing or two about it myself.

I long ago declared that I would not wish to go on living if I found myself in a world dominated by people who no longer care about what’s true and express open contempt for factual evidence. Either a 1984 world where the Party in power is the sole arbiter of what is “true” and enforces it with violence; or a world where truth is whatever society deems it to be, regardless of evidence, and where dissenters are ruthlessly punished by vitriolic abuse or ostracism rather than violence.

I fear we are sleepwalking towards that feared world, where people shun evidence and despise facts: a world where dogma is king, emotion is queen and evidence is exiled; and where dissent from orthodoxy is suppressed by verbal if not physical jackboots.

END_OF_DOCUMENT_TOKEN_TO_BE_REPLACED

This week, I published a column in the Guardian arguing that Richard Dawkins’ sexism is overshadowing his contributions to the atheist movement. It got, shall we say, a large reaction. But not all negative, I hasten to add! I was very pleased with the amount of praise and compliments it attracted – I heard from a lot of people who told me that I said exactly what they’ve been thinking (including this piece by Allegra Ringo in Vice, published the same day as mine).

Because believe it or not, Jerry & Russell & Michael & the rest of the gang, we are not the only ones who are noticing Dawkins’s Twitter freakouts, and he’s not actually doing a fabulous job of PR for atheism right now. You clearly want to think it’s all just an attempt to grab the throne for ourselves or some such damn fool thing, but it’s not. I, for instance, would like a much less sexist atheist movement. I have zero hope of getting it at this point, but that’s what I want.
END_OF_DOCUMENT_TOKEN_TO_BE_REPLACED

As some of you have already seen, Jerry Coyne has written a blog post complaining that Adam Lee has had the unmitigated temerity to criticize Richard “Beyond Reproach” Dawkins. This is great, isn’t it? Constantly being told by Important Guy Atheists that other Important Guy Atheists must not be criticized by underlings? It’s like being a nun, or a corporal.

One of the most despicable attacks on Richard Dawkins in recent years (and that’s saying a lot!) has been posted at the Guardian; it’s by Adam Lee, atheist blogger who writes at “Daylight Atheism”. I won’t bother to dissect it in detail because reading it makes me ill. Dissing Richard is a regular thing at the Guardian these days, and there’s no shortage of unbelievers willing to answer the call. Lee’s piece is called “Richard Dawkins has lost it: ignorant sexism gives atheists a bad name.” Read it and weep. If you cheer, you shouldn’t be reading this website.

Blog, he means. It’s a blog. Why Evolution is True is a blog. END_OF_DOCUMENT_TOKEN_TO_BE_REPLACED

Today Dawkins is angry about an article in the New Statesman titled I was raped when I was drunk. I was 14. Do you believe me, Richard Dawkins?

He’s angry that the New Statesman didn’t call him. But after all, he did tweet last week, hours after Mark Oppenheimer’s article appeared,

“Officer, it’s not my fault I was drunk driving. You see, somebody got me drunk.”

And a later one:

Raping a drunk woman is appalling. So is jailing a man when the sole prosecution evidence is “I was too drunk to remember what happened.”

But as I pointed out, jailing wasn’t the issue.

In my tweets I explicitly stated that I was considering the hypothetical case of a woman who testified that she COULDN’T REMEMBER.

Do those two that I just quoted explicitly state that they are hypothetical? No they do not.

In another turn of the screw, Dawkins called Adam Lee a liar. So now I have to read Adam’s piece again to see if I can find anything that can possibly justify that announcement.

The atheist movement – a loosely-knit community of conference-goers, advocacy organizations, writers and activists – has been wracked by infighting the last few years over its persistent gender imbalance and the causes of it. Many female atheists have explained that they don’t get more involved because of the casual sexism endemic to the movement: parts of it see nothing problematic about hosting conferences with all-male speakers or having all-male leadership – and that’s before you get to the vitriolic and dangerous sexual harassment, online and off, that’s designed to intimidate women into silence.

Is that it? That’s not a lie. There are people who think that, and say so – and there certainly is vitriolic and dangerous sexual harassment, online and off. It is designed to intimidate women into silence – many of the people who engage in it say so, regularly. END_OF_DOCUMENT_TOKEN_TO_BE_REPLACED

Adam Lee sums up the most recent outbreaks at Comment is Free.

Neither of us just plunged into this not so much state randomly or on a whim, nor did we do so as an exciting new way to draw attention to ourselves. It had to do with reasons, with things he said and did.

But over the last few months, Dawkins showed signs of détente with his feminist critics – even progress. He signed a joint letter with the writer Ophelia Benson, denouncing and rejecting harassment; he even apologized for the “Dear Muslima” letter. On stage at a conference in Oxford in August, Dawkins claimed to be a feminist and said that everyone else should be, too. END_OF_DOCUMENT_TOKEN_TO_BE_REPLACED 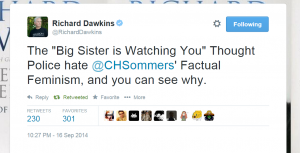 Richard Dawkins ‏@RichardDawkins
The “Big Sister is Watching You” Thought Police hate @CHSommers’ Factual Feminism, and you can see why.

I made another attempt to talk reason. I’m absurdly optimistic, aren’t I.

Richard Dawkins ‏@RichardDawkins 13h
Can it be true, some bloggers are paid by the click, and consequently fake outrage, or play the bully, in order to attract clicks? Hope not.

2h
Answer to my question seems to be yes, and on-line newspapers may be worst offenders – deliberately touting for clicks by provoking outrage.

Ophelia Benson @OpheliaBenson
.@RichardDawkins What about you, Richard? 2 million TGD sold, yes? Outrages many, yes? So…what is your point? You good we bad? That’s it?

@RichardDawkins Haven’t you been – often laudably – provoking outrage for years now? Why rebuke other provokers? Are you being consistent? END_OF_DOCUMENT_TOKEN_TO_BE_REPLACED

I’ve been very critical* of Richard Dawkins’s recent Twitter dictats on abortion and Down syndrome, but now I get a chance to defend him, and from some of his own ardent supporters at that.

As you all no doubt know, he posted an apology plus explanation yesterday. What I want to take issue with here is not the post but a comment replying to a pair of comments pointing out the importance of emotions and persuasion in discussions of moral issues.

Do you have a list of topics at hand about which we should avoid talking logically? That would be most convenient for everyone concerned. Even if you can’t see the absurdity of that, consider that your list would differ from everyone else’s list of sensitive topics and we’d end up with very little that we could indeed discuss rationally.

You say that you marveled at the Blind Watchmaker and were thrilled by the God Delusion. Did you find them to be well balanced between rational argument and emotional sentiment? I, personally, did not find any patronizing emotional arguments in those two, and if there had been they would not only be unreadable, but insufferable. Why should your sensitivities trump those who are offended by analyzing religion too closely?

END_OF_DOCUMENT_TOKEN_TO_BE_REPLACED

Dawkins is trending on Facebook again, thanks to his Most Recent Tweet of Infamy. At the top of the list I see (I assume the list is different for different people, because of their different Facebook histories) there are a lot of mainstream media stories and some Facebook posts by friends, and then after that…there is a long stream of right-wing, Christian, anti-abortion links.