The Guardian tells us about the people replacing the boycotters at the PEN gala this evening.

Mabanckou told the Guardian he had decided to present the award because “I’m a big reader of Charlie Hebdo, because I know that it’s not a racist magazine. I decided to do it in memory of all journalists and cartoonists who die because they have the courage to pursue their work. Finally, I decided to do it because among the members of Charlie Hebdo who were massacred in January 2015 was a friend of mine, the economist and journalist Bernard Maris, who was an extraordinary man.”

END_OF_DOCUMENT_TOKEN_TO_BE_REPLACED

Originally a comment by veil_of_ignorance on A new way to weasel.

(1) It was indeed absurd and cynical how Western governments (and their MENA allies including the KSA) have exploited the CH massacre for empty lip service to free speech. However, this is a common phenomenon which is not limited to CH. We see it anytime when the political agenda allows it: from Raif over Pussy Riot to Liu Xiaobo. This does not mean that those people do not deserve to be honored or are some kind of neoliberal US-imperialist fifth column. Or to inverse the argument: the fact that Edward Snowden is now best friends with Putin – not due to the latter’s universal commitment to free speech but for obvious political reasons – doesn’t mean that Snowden should be accused of enabling Russian, neo-Stalinist nationalism and conservatism. END_OF_DOCUMENT_TOKEN_TO_BE_REPLACED

From one of the worst piece on Charlie Hebdo and PEN to one of the best: Michael Moynihan at the Daily Beast.

On January 7, Jean-Baptiste Thoret was ambling toward the office, late for an editorial meeting—he’s a French film critic, after all—when 12 of his colleagues at the satirical newspaper Charlie Hebdo were being cut to ribbons by AK-47 fire. A fraternal team of semi-illiterate religious fanatics, Chérif and Saïd Kouachi, both Paris-born, casually returned to their getaway car, congratulating themselves for having avenged their aggrieved prophet. As a digestif, an accomplice was across town, preparing to murder Jewish shoppers at a kosher supermarket.

END_OF_DOCUMENT_TOKEN_TO_BE_REPLACED

Well this is a novel way to crap on Charlie Hebdo – fully seeing what’s wrong with all the cries of “racist!” from people who have no French and no knowledge of French culture and no willingness to listen to people who do – and coldly deciding to crap on Charlie anyway, because bafflegab.

It’s Joshua Furst in The Forward.

When I heard that the writers Deborah Eisenberg, Teju Cole, Peter Carey, Michael Ondaatje, Rachael Kushner and Taiye Salasi had publically withdrawn from their roles as table hosts for PEN America’s annual gala in protest over the organization’s decision to award Charlie Hebdo the Freedom of Expression Courage Award, my first reaction was to cringe at the spectacle of a group of writers — many of whom I greatly respect — coming out against a clearly beleaguered, clearly courageous publication simply because they disagreed with its politics. END_OF_DOCUMENT_TOKEN_TO_BE_REPLACED

Hazem Eseifan @Eseifan 14 hours ago
#Charlie_Hebdo’s response to its idiotic critics on the American left. 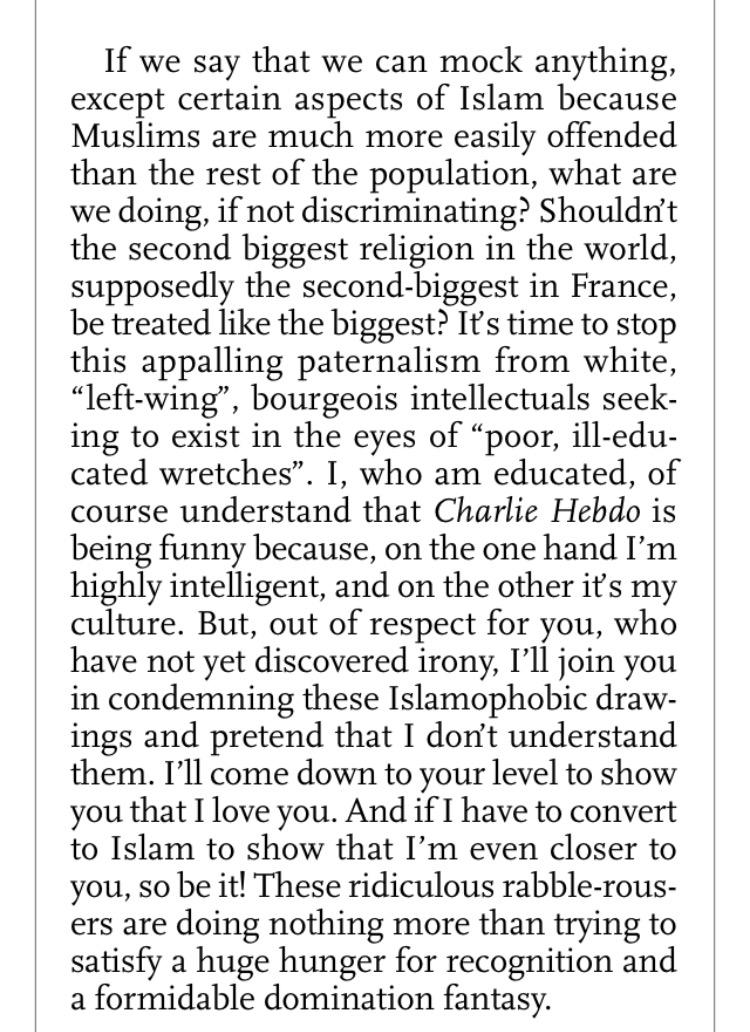 The always-wonderful Joan Smith beez wonderful again with her take on Charlie Hebdo.

Almost 150 well-known writers, including the novelists Joyce Carol Oates and Peter Carey, have written a letter protesting the award. They say they are sickened by the murders but claim the decision to honour the magazine is “neither clear nor inarguable”. They accuse Charlie Hebdo of mocking “a section of the French population that is already marginalised, embattled, and victimised” and causing “further humiliation and suffering” among France’s Muslims.

Seeing this, my mind flashed to The Satanic Verses. Back in 1989, I was dismayed by the number of people who said that the death sentence passed on Salman Rushdie was wrong, but he shouldn’t have offended Muslims. The historian Lord Dacre even declared that he wouldn’t shed a tear if some British Muslims “were to waylay [Rushdie] in a dark street” and teach him some manners. Defending free speech is easier in principle than in practice, it seems.

END_OF_DOCUMENT_TOKEN_TO_BE_REPLACED

Also in pleasanter news: from the New York Times:

Neil Gaiman, Art Spiegelman and Alison Bechdel are among the writers who have agreed to be table hosts at next week’s PEN American Center gala after six authors withdrew in protest of an award being given to the satirical French magazine Charlie Hebdo.

So, that will do. That’s not too shabby. Alison Bechdel has a hit musical on Broadway at this moment.

The literary and human rights organization told The Associated Press this weekend that the other new hosts are George Packer, Azar Mafisi and Alain Mabanckou, a Congolese-born French author who will present the award to Hebdo’s editor in chief Gerard Biard and critic and essayist Jean-Baptiste Thore. PEN is giving the magazine a Freedom of Expression Courage award, a decision that has been fiercely defended and criticized.

That’s Nafisi, if they mean the author of Reading Lolita in Tehran, as I imagine they do. But anyway – cool beans. I would be ecstatic to sit at any one of those tables. END_OF_DOCUMENT_TOKEN_TO_BE_REPLACED

Zainub Priya Dala posted a note on Charlie Hebdo and free expression v intimidation to my Facebook wall, and gave me permission to quote it. I’m sure you remember her experience of violent intimidation.

Regarding the PEN American Center’s decision to present the PEN Free Expression Award to Charlie Hebdo:

In a similarity to my experience, (albeit my assault – on a much smaller scale)… It is not a question of content, but a question of style. Literary satirical style throught the ages has always been met with persecution. It is a style that is poorly understood, where artists attempt to create discourse and debate surrounding an otherwise taboo subject. I support freedom of expression in all its forms, be it admiration of a “banned” writer or a deep dissection of a cartoon in all its complexity. Using violence to silence opinion is tantamount to medieval gagging practices. If we cannot debate sensitive issues without fear of retaliation, we are in no way progressing as a society. The Charlie Hebdo tragedy was disgusting. It was bullying. It was unneccsary loss of lives. An award should be given, a commemoration of sorts…. Otherwise the lost lives will have been in vain. When we venerate people who have been persecuted for their craft, we open the way for courageous people to follow in their wake. I say all this because I knew and still know now the sound of being silenced~zpd

English PEN has a book we can buy.

English PEN is delighted to announce the publication of Draw The Line Here, a collection of cartoons drawn in response to the Charlie Hebdo attacks in Paris in January 2015.

The book is a collaboration between the Professional Cartoonists’ Organisation (PCO), Crowdshed, and English PEN. It features cartoons drawn by British artists in the days immediately after the attacks. The work of 66 cartoonists is featured, including Steve Bell, Dave Brown, Martin Rowson, Peter Brooke and Ralph Steadman.

Glenn Greenwald thinks people have been misrepresenting the arguments of Francine Prose and Deborah Eisenberg.

To defend the award to Charlie Hebdo, PEN officials argued that the award did not constitute an endorsement of the content of the cartoonists’ speech, but rather, only a recognition that they were courageous in expressing themselves. The principle articulated by PEN was clear: a person is deserving of this award if they continue to express their views even in the face of credible threats of violence, and especially if they pay for their right to free expression with their lives.

The objecting PEN writers believe this principle to be invalid and contrived. To prove that point, they offered a hypothetical example that was classic reductio ad absurdum: suppose a KKK leader continued to publish white supremacist filth in the face of credible threats of violence, and was killed for doing so: of course PEN would not bestow the KKK with a courage award, and almost nobody would be comfortable if they had.