The historian Amanda Foreman rebukes the calumnies against Charlie in a terrific op-ed on Charlie at the Wall Street Journal.

The heartfelt standing ovation for Gerard Biard and Jean-Baptiste Thoret—who accepted the Freedom of Expression Courage award on behalf of the magazine—had its own eloquence. Unusually, the many writers in the room didn’t need to say anything to make themselves heard. Simply being at the dinner was a statement, a Rubicon moment for those who believe that universal human rights is a cause worth dying for. Just as boycotting the awards has become the rallying event for those who believe that it comes second to other considerations.

I don’t much want to die for any cause, but if I had to that would be the one I would choose. Universal human rights, not local ones, not faith-based ones, not communal ones. END_OF_DOCUMENT_TOKEN_TO_BE_REPLACED

Jeffrey Goldberg at the Atlantic writes about Charlie, with some useful information.

A subsidiary myth has grown up around Charlie Hebdo: that anti-Jewish hostility in its pages was forbidden. This false belief is offered as proof of the magazine’s “Islamophobic” tendencies (about the term “Islamophobia,” please read my interview with the prime minister of France, Manuel Valls).

This myth arose in part because of a controversy concerning the cartoonist known as Siné, who was fired from the magazine in 2008 after implying that the son of former French President Nicolas Sarkozy would “go a long way in life” after converting to Judaism. Critics of Charlie Hebdo point to this incident as proof thatCharlie Hebdo maintained a double standard when it came to Muslims: “Even Charlie Hebdo once fired a writer for not retracting an anti-Semitic column,” Garry Trudeau stated in his now-infamous anti-free-speech speech at the George Polk Awards ceremony in April. “Apparently he crossed some red line that was in place for one minority but not another.”

I will put aside for now Trudeau’s dark insinuation about Jewish power—one that he embedded in a discussion concerning an extended terrorist siege that ended with the slaughter of four Jews of North African origin at a kosher supermarket—an example of Paris-style “Jewish privilege,” I suppose you could say. END_OF_DOCUMENT_TOKEN_TO_BE_REPLACED

Courtesy of NYU’s Arthur L. Carter Journalism Institute, the video of the forum on free expression and Charlie Hebdo on Tuesday morning.

Join us for a conversation about the challenges to free expression in France and Europe, the role of satire in open societies, the controversies that have surrounded Charlie Hebdo, and the tensions between respect for religious differences and protections for freedom of expression.

Charlie Hebdo’s recently appointed editor-in-chief, Gérard Biard, and its film critic, Jean-Baptiste Thoret, are visiting the United States for the first time since the attack on Charlie Hebdo’s office in Paris, which killed eight of their co-workers and four others. On the evening of Tuesday, May 5, they will receive the PEN/Toni and James C. Goodale Free Expression Courage Award at the PEN American Center’s annual Literary Gala in New York.

In light of the refusal of the anti-Charlie Hebdo protesters to discuss or defend their claims about Charlie, let’s take another look at those claims. Let’s consider what they’re leaving out there, unexplained and unargued.

END_OF_DOCUMENT_TOKEN_TO_BE_REPLACED

Boris Kachka gives a rather sneery account of the PEN gala.

Perhaps unsurprisingly, the two people most sanguine about the ruckus were the honorees, who’ve seen worse. “I’m surrounded by cops, and it’s no problem,” said Gérard Biard, the French satirical paper’s current editor-in-chief. “I began to get used to it,” he added — as he has to the notion that Hebdo traffics in needlessly provocative racist caricatures. “I would like to remind the protesters that the first victims of Islamism are Muslim. We don’t attack Muslims, we defend them. Do they?”

END_OF_DOCUMENT_TOKEN_TO_BE_REPLACED

Salty Current went to the PEN forum on Charlie Hebdo and challenges to free expression yesterday, and reports on it at her blog.

What she says about the difference between French secularism and US “secularism” is exceptionally useful. Bolding mine.

The conversation covered important differences between US and French law and culture, specifically between secularism as practiced in the US and laïcité in France and between US and French laws surrounding freedom of expression. Critics of the magazine in the US often seem to ignore the difference between US secularism (or “secularism”) and French laïcité. Laïcité as they described goes beyond the separation of church and state – it understands the public sphere and political discourse as a common space in which religion has no role or status, and outside of which religion (for some) is practiced, and respected, privately. In this context, religion is seen as intruding on the public sphere and publicly mocking religious iconography and practices as political targets is acceptable. This can be difficult to understand here in the US because our system is so different in theory and in practice. The US system wasn’t really discussed at the forum, but as I’ve argued many times it’s based on a bogus sort of compromise in which institutionalized religion is (in theory) kept separate from the state, but religious claims and identities suffuse political discourse and public policy, all while people are expected to refrain from criticizing or mocking religion because it’s an allegedly personal and emotional matter. Whatever the problems with laïcité in practice (and Berenson hinted at some, although unfortunately there wasn’t time to return to them), the US system with its tradition and practice of deference to “personal” religion even as religion colonizes public life is ridiculous and anti-democratic.

Read it all; it’s outstanding.

There was a panel on free speech and satire in the wake of the Charlie Hebdo murders at the University of Minnesota on January 29th. There was also, we now learn from Inside Higher Ed, a debate on the debate later on.

When Muslim students complained about posters that promoted the event, the university investigated their concerns and issued a report that questioned the judgment of those who signed off on the posters. And the university sent an email that some interpreted as an order to remove the posters, although the university disputes this.

The discussion raises questions about how colleges and universities should balance their commitments to academic freedom and free speech with the cultural sensitivities of students and others involved in campus life. And like the recent PEN award protests over a planned tribute to Charlie Hebdo, it’s also a reminder of how controversial the magazine and what it stands for remain, and how the attack continues to reverberate among thinkers across continents.

END_OF_DOCUMENT_TOKEN_TO_BE_REPLACED

The writer Monica Byrne presents us with an example of well-meaning but confused reasons for objecting to an award’s being given to Charlie Hebdo. The example is interesting because I keep finding the objections and protests under-explained and under-motivated, so I remain curious about what exactly the protesters think they’re protesting.

She titles her post “The PENAmerican award I wish I could give tonight.” Ok, but wishing you could give a different award is nowhere near a reason for protesting one actually being given, especially under these particular circumstances. END_OF_DOCUMENT_TOKEN_TO_BE_REPLACED

Highlights from #PENgala and the award to Charlie.

Neil Gaiman ‏@neilhimself 16 hours ago
Gerard Biard, Charlie Hebdo editor in chief, gets a standing ovation at the #PENgala. This was how his speech ended. 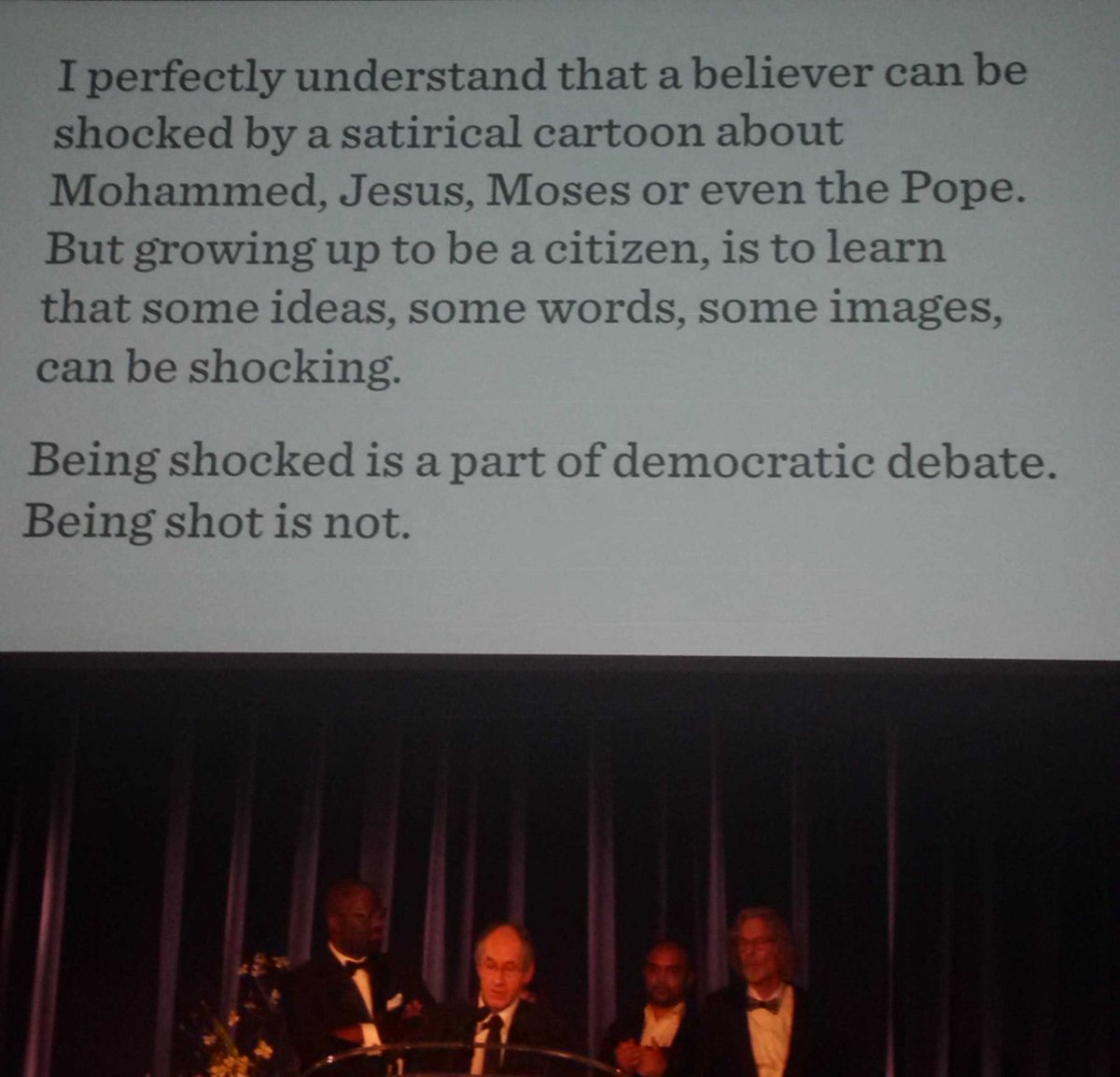 END_OF_DOCUMENT_TOKEN_TO_BE_REPLACED

The Guardian’s report on the PEN gala and the award to Charlie Hebdo is – predictably – much nastier than the Times’s. The Guardian throws them under the bus in the first sentence.

Charlie Hebdo magazine received a controversial freedom of expression award from American PEN on Tuesday night despite the vocal opposition of many of its own high-profile members.

That’s not only nasty, it’s bad writing – it sounds as if “members” of Charlie Hebdo vocally opposed the award. Hacks. But let’s focus on the nasty – they have to inform us instantly that the award is “controversial” and that many important people were vocally opposed. They have to load the dice, poison the well, frame the story. END_OF_DOCUMENT_TOKEN_TO_BE_REPLACED