First, the claim about what I said: 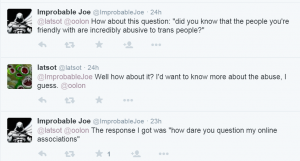 Improbable Joe ‏@ImprobableJoe Jul 21
@latsot @oolon How about this question: “did you know that the people you’re friendly with are incredibly abusive to trans people?”

latsot ‏@latsot Jul 21
@ImprobableJoe Well how about it? I’d want to know more about the abuse, I guess. @oolon

Then, the actual exchange: 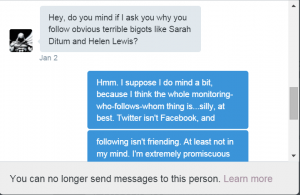 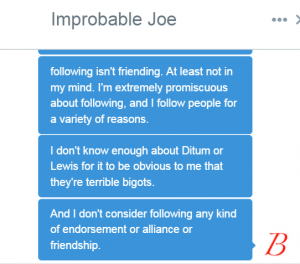 Hey, do you mind if I ask you why you follow obvious terrible bigots like Sarah Ditum and Helen Lewis?

Hmm. I suppose I do mind a bit, because I think the whole monitoring who follows whom thing is…silly, at best. Twitter isn’t Facebook, and following isn’t friending. At least not in my mind. I’m extremely promiscuous about following, and I follow people for a variety of reasons.

I don’t know enough about Ditum or Lewis for it to be obvious to me that they’re terrible bigots.

And I don’t consider following any kind of endorsement or alliance or friendship.

I awaited a reply, but found I was blocked, instead. Apparently my reply was so rude and offensive and outrageous it merited a block…and then, a few months later, a pack of lies about what he said and what I said.

I was actually a lot more polite than I wanted to be, because I felt sorry for Joe, because he often complained of loneliness and self-loathing. I used to try to include him in conversations because of that.

I wanted to be less polite first of all because frankly I think it’s creepy to go around checking on who is following whom on Twitter, and even more creepy to ask people why they are following This Person or That One. What the hell business is it of anyone else’s? What business was it of Joe’s?

And second because I was pretty sure that claim about Helen Lewis and Sarah Ditum was bullshit, but didn’t want to spend the time and energy to go snooping through their Twitter timelines to try to figure out what he was talking about. Plus when I even thought about it the whole “what business is it of yours??” question became all the more urgent.

And third because anyway I hate this ridiculous belief that following is endorsement.

And fourth because I’m bloody-minded and insubordinate and I just can’t stand people trying to tell me what to do for ridiculous flimsy reasons, especially people with as little connection to me as Improbable Joe.

There are now several people running around squawking that I’m a transphobe and a bigot, and that is bullshit. But I’ve seen it happen to other people as well as to me: the lie gets told and then it spreads and expands with every telling. One example of many: after I wrote that post about Jezebel’s fatuous coverage of Caitlyn Jenner’s Vanity Fair cover, one red-rager shouted at me that if only I’d used female pronouns, people wouldn’t be all blah blah blah. I replied that I had used female pronouns. That was the end of that conversation – but the red-rager went on red-raging elsewhere.

So that’s how this works.

An overzealous state trooper » « “Do not use it with non-Muslims”