I stopped in at that chain drug store that I mentioned yesterday – Bartells – to see if they still carry OTC homeopathic asthma “treatments.” I could find only one thing (and didn’t feel like asking anyone). There’s only one and it’s not right next to other asthma meds; I couldn’t find any other asthma meds. They have everything with pseudoephedrine behind the counter now (because meth, ya know), and maybe all the asthma meds have pseudoephedrine so that’s why I didn’t see any. If that’s the explanation that’s an improvement on the last time I looked at this.

But still there is one item: safecare AsthmaCare for temporary relief of minor asthma symptoms.

In big letters in the middle:

So it’s saying this stuff is treatment for that. But it’s not. But it says it is.

There is a small red strip at the bottom (so much less noticeable than the list of things it gives “temporary relief” for) that says “Not a rescue inhaler.”

On the side, looking super official and technical, it gives instructions on how to take it and says “approximately 100 adult doses.” That makes it sound like real medicine. It’s a small box with an even smaller bottle in it, so if a thing that tiny has 100 doses it must be really powerful. In some way.

Drugstore.com has it for the low low price of $23. For a tiny bottle of nothing. 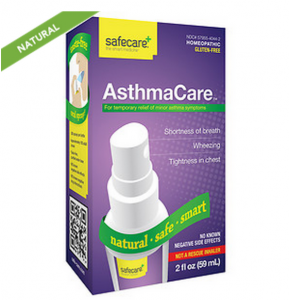 It’s hard to see, but there in the top right corner it says HOMEOPATHIC – right on top of GLUTEN FREE