Wednesday night last week Cooper and I took our post-dinner walk down to Kerry Park, which is a little pocket park on the south slope of Queen Anne Hill with a sweeping view of the southern Cascades, Mount Rainier on the few days it’s clear enough, downtown, the harbor, and Puget Sound. If you’ve ever seen a postcard or generic photo of Seattle, it was taken from there. It was a beautiful windy night with clouds ripping across the sky. When we got to Kerry Park we found people arranging big illuminated squares on the grass, squares that held letters, one per square. While Cooper sniffed all the things I looked at the squares to read the message (upside down: I was standing at the top of them) – and got NET NEUTRALITY NO.

NO?? That seemed incongruous. The NO people would be at corporate dinners or on the phone to lobbyists, not messing around in Kerry Park at night. Huh. Then here came someone carrying another square. Ah. “Is that the W?” I asked her. “I hope?” It was, of course.

They asked us – the random people in the park at that moment – to help hold up the sign and be in the photo. Fun! So I wrapped Cooper’s leash around one of the railings and beed in the photo.

I found the photo at the Northwest Progressive Institute. 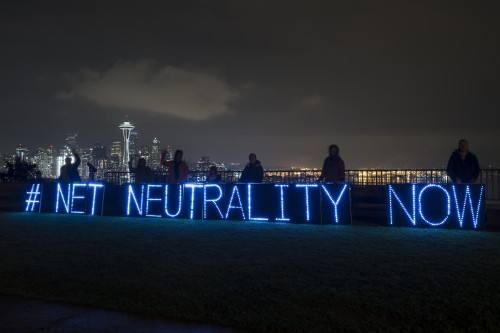 I’m behind the L, looking lumpy because in a hoody jacket.