Updating to add what Maajid said: 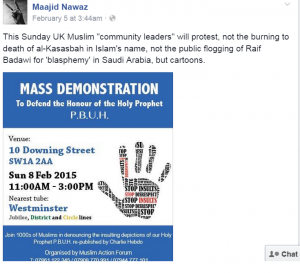 This Sunday UK Muslim “community leaders” will protest, not the burning to death of al-Kasasbah in Islam’s name, not the public flogging of Raif Badawi for ‘blasphemy’ in Saudi Arabia, but cartoons.