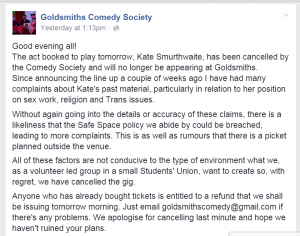 The act booked to play tomorrow, Kate Smurthwaite, has been cancelled by the Comedy Society and will no longer be appearing at Goldsmiths.
Since announcing the line up a couple of weeks ago I have had many complaints about Kate’s past material, particularly in relation to her position on sex work, religion and Trans issues.

Without again going into the details or accuracy of these claims, there is a likeliness that the Safe Space policy we abide by could be breached, leading to more complaints. This is as well as rumours that there is a picket planned outside the venue.

All of these factors are not conducive to the type of environment what we, as a volunteer led group in a small Students’ Union, want to create so, with regret, we have cancelled the gig.

Anyone who has already bought tickets is entitled to a refund that we shall be issuing tomorrow morning. Just email goldsmithscomedy@gmail.com if there’s any problems. We apologise for cancelling last minute and hope we haven’t ruined your plans.

But just a few days before that, on January 27th –

HELLO! We have the wonderful Kate Smurthwaite (great feminist comedian) doing a solo show next week and it’s FREE for you! The poster is pretty good too, right?
https://www.facebook.com/events/1532043057063716/?fref=ts

So that was quite a radical change, for no real (satisfactory) reason.

Not liking her stuff or her politics would be a reason for not inviting her in the first place, other things being equal. (It might not be a reason if other people loved her stuff and her politics, and you alone had bad taste and shitty politics.) You don’t really need reasons for not inviting people in the first place (unless you’re part of a group and everyone else wants to invite the people in question). You damn well do need reasons for telling people – especially at the last minute – “Sorry, we’ve decided we don’t like you!”

This one, posted after the “Good evening all!” one, is even more insulting and rude. 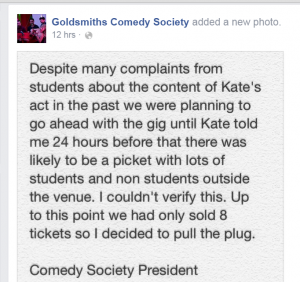 Despite many complaints from students about the content of Kate’s act in the past we were planning to go ahead with the gig until Kate told me 24 hours before that there was likely to be a picket with lots of students and non students outside the venue. I couldn’t verify this. Up to this point we had sold only 8 tickets so I decided to pull the plug.

I don’t know why the president decided to do that. I can’t tell what the reasons were. Maybe it was just some kind of erring on the side of caution thing, given that omigod there had been “many complaints from students about the content of Kate’s act.” I don’t know, but I think it was extremely bad manners at best to cancel the gig, and just plain disgusting to trash Kate in the process.

Formally nominated » « Goldsmiths students, she was told, have only correct beliefs