It’s not just IS. Lejla Kurić reminds me that Karadžić said much the same thing at his trial. I’d forgotten that if I ever knew it.

Former leader Radovan Karadzic has said the Serb cause in the Bosnian war was “just and holy” as he began his defence at his genocide trial at The Hague.

Marcus Tanner at the Guardian expanded on the point.

Listening to Radovan Karadzic describe his war against the Bosnian Muslims as “holy”, it’s tempting to think he is making a bad joke, or fooling the judges. This would be to mistake both the man and his supporters. Most of the Bosnian Serb fighters serving under him that I met in the early 1990s talked the same crusading talk, jumbling up ethnic, economic and religious grievances against their Muslim neighbours, and claiming to be avenging the Turkish conquest of Bosnia in the 15th and 16th century.

Their strident confessional animosity explained their obsession with blowing up religious monuments – whatever their historic value. That’s why Bosnia lost the lovely 16th-century “painted” mosque in Foca in eastern Bosnia, and the soaring Ferhadija mosque in Banja Luka, in the north-west, which disappeared along with every other mosque (and Catholic church) they could get hold of. 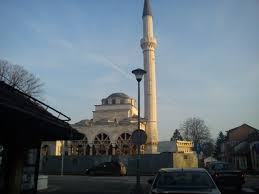 Westerners often couldn’t figure out why Karadzic’s fighters seemed so indifferent to, or even satisfied by, the destruction of “their” old libraries and old towns. In reality, though the Serbs had migrated en masse into the towns after the communist takeover in 1945, many felt little ownership of this still alien landscape of mosques and minarets.

The Serbs of Karadzic’s stamp were on a mission to change that urban landscape for good, and found in the Orthodox church an unswerving supporter. The hierarchy blew incense over every Serbian offensive, however bloody. When the paramilitary group know as the Tigers stormed the northeast town of Bijeljina in 1992 and butchered a good number of the local Muslims, “pour encourager les autres”, (an assault memorably captured by a Time magazine photographer) their leader, nicknamed Arkan, sought – and received – the public blessing of one of the leading bishops.

Sometimes religion motivates people to be better. Sometimes it allows them to be unspeakably worse.

The Orthodox hierarchy in Serbia maintained its uncritical alliance with Karadzic to the end of the war, and beyond (as did the Croatian Catholic bishops with their own holy warriors). The Orthodox churches of Greece and Russia were equally fulsome. In Athens in 1993, the Greek bishops feted Karadzic, proclaiming him a Christian hero. So, when Karadzic says he his war was “holy”, he’s not acting. He believes precisely what he says. And throughout the Balkans, and beyond, the Orthodox church has taken him at his word.

God hates what you hate.

White and Scottish, period » « For they are merely property