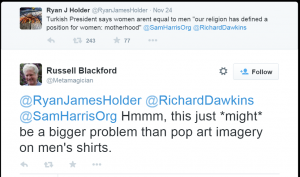 How do we calibrate these things? How to we adjudicate them? How do we know which Thought Leader on Twitter to listen to on the subject? How do we know for sure what problems we should be talking about? I suppose we could run everything past Blackford and Dawkins and Harris first, but then how would they have any time to talk about the most important things? Because there are more important things than telling feminists what we should be talking about, surely. Aren’t there?