Thus with a pop and a whiff of sulfur I found an update by Lee Moore at the top of the stack just now. And what a ridiculous update it is. 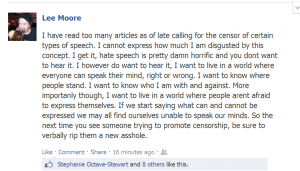 I have read too many articles as of late calling for the censor of certain types of speech. I cannot express how much I am disgusted by this concept. I get it, hate speech is pretty damn horrific and you dont want to hear it. I however do want to hear it, I want to live in a world where everyone can speak their mind, right or wrong. I want to know where people stand. I want to know who I am with and against. More importanly though, I want to live in a world where people arent afraid to express themselves. If we start saying what can and cannot be expressed we may all find ourselves unable to speak our minds. So the next time you see someone trying to promote censorship, be sure to verbally rip them a new asshole.

Brave words from someone who isn’t subject to any of the obvious kinds of hate speech. Well except the part about ripping them a new asshole, however verbally. That’s just bully-talk.