A UK tabloid, the Daily Star, is in such a lather about the urgent duty of telling Kate-who-married-William how to body that it published a story about the ghost of Diana – the mother of said William who died I think it was 16 years ago – giving Kate how to body advice. Yes really. 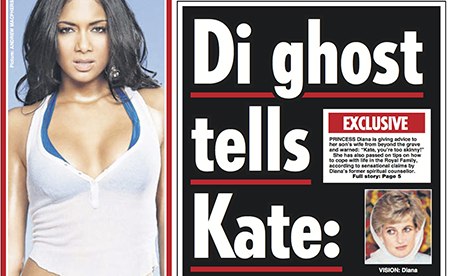 Under a front-page headline so ridiculous I assumed it was a spoof for a couple of hours, the paper ran the “story”: Di ghost tells the duchess: You’re too thin! They labelled it an exclusive.

That’s right. Not only has the body relentlessly lauded and photographed and peddled to women everywhere as the ultimate pinnacle of ideal, unachievable, feminine thinness attracted the inevitable media backlash – but the paper in question had the gall to take body shaming to a completely new plane. The unrelenting criticism of women’s figures has gone paranormal.

That could become a trend. Joan Crawford tells Hillary Clinton how to body. Queen Victoria tells Angela Merkel how to body. Catherine the Great tells Elena Kagan how to body.

Without even going into the breathtaking insensitivity of evoking a dead woman’s memory to body-shame her son’s new wife, articles such as these pose an even more immediate and insidious threat.

As we sell our daughters birthday cards, dressing-up costumes and childhood books about becoming a beautiful princess (while our boys revel in merchandise promoting the active adventures of astronauts) the media obsession with the duchess’s every bodily inch reinforces the principle that girls should be seen and not heard. Compound that with the contradictory message that she is simultaneously perfectly, joyously slender and selfishly, irresponsibly underweight and we’re also broadcasting to our girls, loud and clear, the message of mandatory female insecurity.

The duchess’s treatment testifies that though they will forever be evaluated on the basis of their looks alone, those looks will always be cruelly attacked by somebody; there is no way they can win.

That is true. It’s something that’s been forcefully shoved on my attention in the past few years – there is no way we can win. We are targets, no matter what.