It’s been a day for Displaying the Nasty, so I’ll display some more.

There’s a horrible Facebook page called Skeptics and Atheists against Rebecca Watson. It’s public, so you can look at it if you’re on Facebook.

Cute, isn’t it? Just “No Rebecca Watson” – just like that.

And who sets up a page “Against” an individual? Unless the individual is “Mother” Teresa or a bishop or some other truly harmful person of that kind. I reported it to Facebook ages ago, but of course they replied that they’re fine with it. It’s not a woman nursing a baby, so let a thousand flowers bloom, amirite?

Rebecca tweeted about it yesterday (using her dreaded weapon of sarcasm, as usual), so I feel able to post a sample from its wisdom. 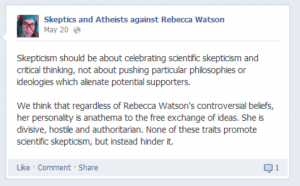 And a longer one that I’ll just quote. This is from two days ago, and is no doubt what prompted Rebecca’s tweet.

So with everything being as it is, I just.sent this email to the people over at.SGU. let’s see if we get a reply.

Good day, my name is Cecil Fuson. Together with Brandi Olson and a member of the Atheist news group (A news) we run a small Facebook group that is called Skeptics and Atheists against Rebecca Watson. We currently have 87 members and are growing everyday. It should be noted that a fair number of our fans are also fans of the SGU as well as on the personal friend list of some of the members of the SGU

We were wondering if you could give us a quote and answer a question for us. Why is Rebecca Watson still on the SGU?
It is clear that by her own blog post that she no longer supports the JREF, the CFI or Richard Dawkins. It is clear by the large number of posts, groups and petitions that the Skeptic and Atheist community no longer support Watson. It is clear that Watson uses the fame from programs like the SGU to spread her own agenda and misinformation. While we fully agree that Rebecca Watson has every right to speak her mind, we feel that her actions , no matter how well meaning they may be, are doing more damage than good.
the SGU seems to support the same groups that Watson boycotts and the same groups that want nothing to do with Watson.
So with the public opinion being what it is, why dose Rebecca Watson still have a spot on the SGU?

Thank you for your time. And we hope to get a reply soon.

Not the sharpest knives in the drawer, are they.

Update Just to round out the picture – a couple of posts from May 20, the day the page was born. 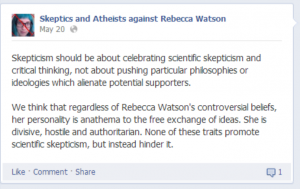 How stupid is that? It starts by talking about “pushing particular philosophies or ideologies” and then instantly changes its mind and talks about “her personality” instead.

Plus it announces that she’s divisive and hostile, on a brand new page set up to be hostile and divisive.

Nothing creepy about that. Nothing divisive and hostile about that, or authoritarian, either. Nothing there that’s anathema to the free exchange of ideas. Gosh no.