I’m having a rather heated discussion with Mehdi Hasan on Twitter, with Oliver Kamm joining in, also the Ex-Muslims Forum and Alex Gabriel and a few more. What about? “Islamophobia” of course.

I started because Mehdi had been equating Maryam with fascists and the EDL earlier. 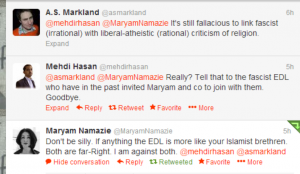 Really? Tell that to the fascist EDL who have in the past invited Maryam and co to join with them. Goodbye.

Don’t be silly. If anything the EDL is more like your Islamist brethren. Both are far-Right. I am against both. @mehdirhasan@asmarkland

@MaryamNamazie@asmarkland So I’m an Islamist now? You’re a parody of yourself. Go away. The EDL are calling you. Ba-bye.

I have never supported the EDL; unfortunately you cannot say the same about Islamism now can you? @mehdirhasan@asmarkland

Mehdi fights dirty. Maryam has nothing to do with the EDL or fascism; she denounces both.

He’s right that Muslims are a target group, but he’s dead wrong that all critics of Islam are xenophobic anti-Muslim bigots.

Update: There’s also one where he says Maryam “compares hijab to Nazism” – which sounds like a falsehood to me. In a tweet to me just now he even claimed she compares wearing hijab to Nazism, and that I really don’t believe.

@CEMB-forum Let me tell you what’s NOT legitimate: comparing hijab to Nazism and FGM, as your islamophobic friend @maryamnamazie does

That’s easy for him to say, isn’t it. No one is going to force him to wear it.

One sentence, from nine years ago » « Morris dancers drinking ale and wearing hijabs