Yesterday I took a look at the Scientology building on Fountain Avenue, which is very near the hotel I stayed in on Vermont. Holy shit that place is creepy. 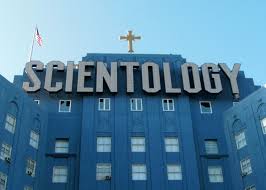 Think the name is big enough?

The building is a former hospital, and it’s massive. The paint job makes it very conspicuous – it’s like a blue Oz.

There are security guards and guardish-looking people with belts festooned with surveillancey equipment all over the place. The street that runs along the east side of the fortress building is named L Ron Hubbard Way. It’s a public street but I felt very…not on public property while I was walking north on it.

With a piece of wood » « CFI’s Director of Public Policy