And it continues. Remember the crazed reactions to Rebecca’s article in Slate? In particular the one where Russell Blackford took the trouble to tweet a reporter for the Australian Broadcasting Corporation in order to call Rebecca a liar? This one? 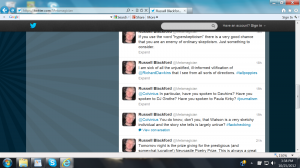 He’s at it again, or still. He’s still doing what he can to harm Rebecca. 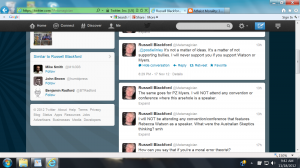 He might say it’s because of Stef McGraw, but that doesn’t make sense. Stef McGraw doesn’t consider Rebecca the world’s most evil monster bully. Remember?

Being Eric Dondero » « Bring out the hemlock