They seem to have a shaky grasp on what causes what, in Saudi Arabia.

A report in Saudi Arabia has warned that if Saudi women were given the right to drive, it would spell the end of virginity in the country.

See? That’s bizarre. If Saudi women drove, babies would be born non-virgins? How? How would that work?

Though there is no formal ban on women driving in Saudi Arabia, if they get behind the wheel, they can be arrested.

That too is bizarre. If there’s no actual law against women driving, what can they be arrested for?

As part of his careful reform process, King Abdullah has allowed suggestions to surface that the ban might be reviewed.

This has angered the conservative religious elite – a key power base for any
Saudi ruler.

Now, one of their number – well-known academic Kamal Subhi – has presented a new report to the country’s legislative assembly, the Shura.

The aim was to get it to drop plans to reconsider the ban.

Anyway –  well-known academic Kamal Subhi seems to have a ludicrous idea of sensible risk-avoidance. Letting anyone do anything would increase all sorts of things, but it’s not worth locking everyone up in a small room for life to avoid all those things.

On the other hand, if the Saudi bosses do decide women can drive, I hope they urge them to reconsider the policy of wearing a blanket over their heads too. 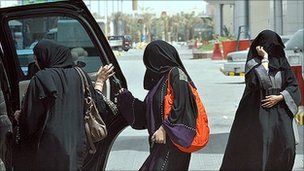 You don’t want those women driving a car, for sure.