This is an entry in my series where I read physics articles in Scientific American, and provide my weary perspective as a former physicist.

Today I’ll be discussing the article “Quantum Steampunk”, by Nicole Yunger Halpern, in the May issue of SciAm. This one is paywalled, but you can still check out the opening paragraph, in which the author appears to excerpt a paragraph from her latest novel.

It’s a bit indulgent, but hey, whatever works as a hook.

END_OF_DOCUMENT_TOKEN_TO_BE_REPLACED

It’s time for another entry in my series where I read through physics articles in Scientific American, now through the eyes of a former physicist. It’s a gratifying exercise because I used to struggle through these when I was in high school. Now, if I struggle, I know it’s not my fault!

The main thrust of the article is that they used radio astronomy to map out the Milky Way galaxy. Now you might think that since we’re inside the Milky Way, we have an especially clear idea of its shape. But it’s surprisingly difficult, because determining the distance of stars is hard, and there are dust clouds in the way. If you’ve ever seen an image of the Milky Way as viewed from the outside, those are all artists’ conceptions and we don’t know what it actually looks like.

So the first thing I see in this article, is an image of the Milky Way, as viewed from outside. At first I thought, this is really neat, finally an image that’s more than just an artist’s conception. But nope, it’s just another artist’s conception. Created to be consistent with the study’s results, but still just art.

END_OF_DOCUMENT_TOKEN_TO_BE_REPLACED

Someone went and got me a subscription to Scientific American, so for the past few months I’ve been covering physics articles, now with the benefit of a PhD. Perhaps it’s a way to keep in touch with my physics roots as my career has moved on to other things.

In this month’s issue, the cover article is “A Cosmic Crisis“, about a discrepancy between two measurements of the age of the universe.

Funny thing, there’s always a letter from the editor in chief where he introduces all the major articles, and here he contrasts the “cosmic crisis” with another ongoing crisis, that thing between US and Iran. Yep, this sure is an article that was written last month! FWIW, I could do with some reading that has nothing to do with COVID-19.

I thought I’d review the article in approximately the order in which I read it: pretty pictures first, walls of text last if at all. For serious, this is the correct way to read a science article, I can say that as a person with a PhD.

END_OF_DOCUMENT_TOKEN_TO_BE_REPLACED

Someone went and got me a subscription to Scientific American, which is nice. Haven’t read one of those since before my PhD. In theory, I should be able to understand it a lot better. In practice, popular articles often omit crucial details or use “creative” explanations that would confuse most professionals.

So I went straight to the physics section and found an article titled “The Triple Slit Experiment” by Urbasi Sinha. Already this has me a bit confused. What’s so special about three slits? And why stop at 3? You can just have slits repeating indefinitely. It’s called a diffraction grating, and I had one when I was a kid (from this book). 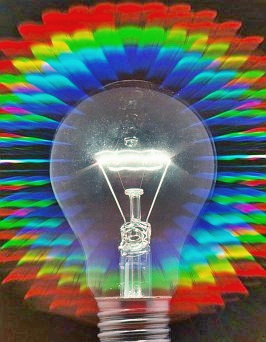 Diffraction gratings turn everything to rainbows, and are great toys. Credit: Wikimedia Commons

So I looked through the article to see what was going on. The article makes three main points: