Liberationism vs assimilationism is a historically important dichotomy, which dates back to the gay liberation movement of the 1960s.  It put a name to certain political disagreements among LGBT/queer people that persist to the present day.  That said, in the present day, liberationism/assimilationism is less relevant, just one lens of many that we may apply whenever it seems particularly apt (e.g.).  And often, when we do talk about the dichotomy, we feel the need to re-explain what the dichotomy even is.

Ahem…  In a contemporary context, assimiliationism refers to the desire to blend in with mainstream culture, to emphasize “we’re the same”; while liberationism refers to a desire for more radical change.  A somewhat longer explanation is available here.

The primary problem, is that “liberation vs assimilation” has largely been collapsed into “good vs bad”, while explicitly denying it.  Rowan Ellis says,

She frames it as a neutral dichotomy, in which she has an expressed personal preference.  But the way the dichotomy is framed is far from neutral.  Indeed, within seconds, she draws a spectrum that goes from condemnation to liberation, with assimilation placed at the halfway point. 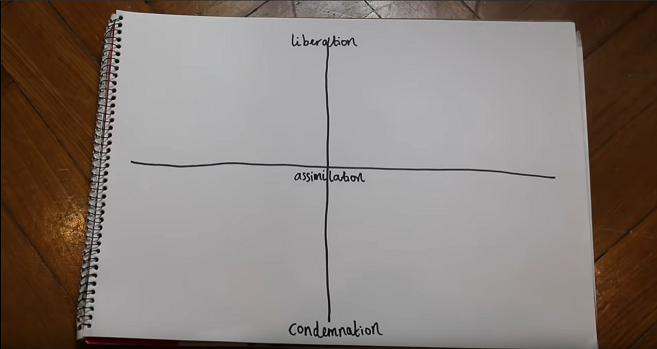 In the video, Rowan Ellis provides multiple comparisons of movies/shows that she considers liberationist or assimilationist, and in each case she argues that the liberationist representation is better.  In a later video, she argues that the problem with Love, Simon is that it’s assimilationist.  I don’t wish to defend or criticize any of these particular examples, but her choice of examples clearly establishes a framework in which liberationist media is just better.  And I wish she would own up to it instead of pretending to be neutral.

It might be said that the liberationist/assimilationist dichotomy cannot be neutral.  After all, the dichotomy was created by the gay liberation movement to describe the differences between their own views and those of their political opponents.  Those who were called assimilationists likely did not call themselves assimilationists.  I mean, it’s kind of an inherently negative word, a sure sign that assimilationists had little say in the creation of this whole narrative.

And that’s okay.  We uphold our own views as enlightened, call our opponents nasty names, that’s politics.  But it’s a poor fit for trying to describe different forms of queer representation, because it implies a strong judgment on people who don’t prefer the “right” kind.

When Rowan discusses the reasons why people might like assimilationist representation, she says that sometimes liberationist media is just made poorly, or it’s less accessible.  She discusses how mainstream representation is important to change mainstream attitudes towards queer people.  However, she seemingly can’t imagine any reason why queer people might enjoy assimilationist media for itself.  She practically conflates “assimilationist” with the idea of being targeted at mainstream audiences, rather than queer audiences.

So here’s my personal experience.  I watch lots of indie films, mostly focused on gay/bi men, mostly drama or romance.  They’re mostly not very good, and I wouldn’t say I enjoy them so much as I enjoy complaining about them.  (No specific examples, because my memory isn’t so great, and I’m not willing to do the research.)

I don’t know which of these might be considered assimilationist or liberationist, because that’s not a lens I use.  However, I observe that some of them try to portray gay men’s lives in all their super gay glory, and it just falls so flat.  Often, it’s based on the writer/director’s personal experiences with the gay social scene, and on the assumption that their experiences are representative.  Depicting how queer lives can be different from straight lives: A-OK.  The oppressive assumption that most queer people lead more or less the same different life: not okay.  This is something I feel keenly, being a queer ace SJW in STEM with low emotional expression.  Sometimes what queer creators consider liberation doesn’t have any more room for me than assimilation does.

And this is the problem I have with the assimilation/liberation lens.  It puts all the focus on whether the queer lives portrayed are similar or different from those of straight people.  What about the differences between queer people?  If we are all different, then it stands to reason that some queer people like “assimilationist” media, not because it’s mainstream, but simply because it more accurately reflects their lives.  Some might prefer “liberationist” media because that more accurately reflects their lives.  And some of us… are just perpetually disatisfied with all media.