None dare call them terrorists. They’re just lovable red-blooded patriots who like to point guns at people to bring about political change — but they’re not terrorists! Just ask the patriots out in armed force to back up Cliven Bundy over the weekend:

I wonder how many Boston liberals spent the night cowering in their homes wishing they had an AR-15 with a hi-capacity magazine? #2A
— @NateBell4AR via web

It begins. Because everyone knows shooting at an explosion fixes everything ::Eyeroll::  An actual relevant, valid question might be more along the lines of how did these guys manage to assemble such a vast deadly arsenal and would background checks or other restrictions have made that more difficult? Meanwhile Tony Perkins also has a theory …

RW Watch — If Congress wants to stop these tragedies, then it has to address the government’s own hostility to the institution of the family and organizations that can address the real problem: the human heart.

The two men sought by the FBI in connection with the Boston Marathon bombing led police on a wild shooting, robbing, bomb-throwng chase through downtown Boston and Watertown last night beginning around 11PM local time. After a fierce firefight with police one suspect is dead, at least one police officer seriously wounded, and last I saw one suspect remains at large. Another police officer died from multiple gunshot wounds received in what is believed to be the initial confrontation with the two suspects earlier. So who are these guys? END_OF_DOCUMENT_TOKEN_TO_BE_REPLACED 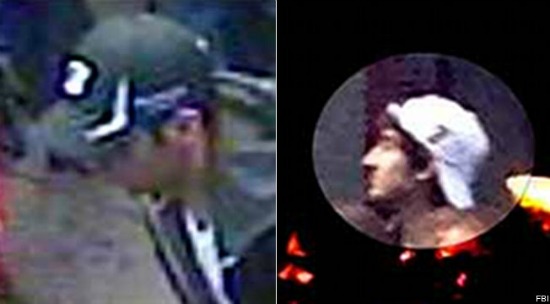 Here they are, if these guys look familiar the FBI would like to hear from you. Cllick image for more info at Talking Points Memo.

USA Today — The U.S. Secret Service is investigating a letter containing a “suspicious substance” that was addressed to President Obama, the agency confirmed on Wednesday, and at least three U.S. senators also reported receiving suspicious mail. FBI spokesman Paul Bresson said the letter to Obama tested positive for the substance ricin. The letter was sent to Obama on Tuesday, and was intercepted at the White House mail screening facility, according to Secret Service spokesman Brian Leary.

Ricin is toxic at the microgram level because it disrupts the ability of RNA to maintain and repair cells. It acts like a low abundance protein, actually it is a low abundance protein, just a deadly one rather than a helpful version. Other letters have also tested postive, one sent to Sen Shelby (R-AL). If those results are confirmed, this is not a partisan effort. It remains to be seen if these letters have anything to do with the Boston bombing.

Via Balloon Juice and Dave Weigel I came across this hopeful nugget of rationality and decency. Seems this guy bought the BostonMarathonConspiracy.com for a very worthy reason: END_OF_DOCUMENT_TOKEN_TO_BE_REPLACED

“Is this another false-flag staged attack to take our civil liberties ….” That question was actually asked by an asshole working for conspiracy monger Alex Jones at Boston presser today. And note the delicious false assumption implied, is this another false …

The festive atmosphere of the Boston Marathon has turned into a grisly murder scene this evening after shrapnel ripped through hundreds of excited onlookers and joyous partipants, killing at least three people. The toll stands at 2 3 confirmed dead with 23 at least 113 injured from two timed bombs that went off seconds apart at the packed finish line, presumably as intended, and a third that was intentionally detonated by a police bomb squad (Yet another bomb has been reported at the JFK library in Boston). The only silver lining is there were significant medical assets at the attack site, so many victims lives’ were saved from what would otherwise have been fatal injuries. It is widely reported emergency responders treated victims on the scene who suffered partial or full traumatic amputations. The injured now being treated at local area hospitals span the gamut, from a two year-old with head trauma to several elderly victims with injuries ‘threatening life and limb’.

I checked with a couple of friends who live in Boston and work downtown, one said he heard it across 20 blocks. Tax day, Patriot Day, Boston, and JFK; all consistent with targets hit by terrorists looking to maxmimize casualties and therefore news coverage. FWIW I am seeing speculation from demo experts saying the smoke shown in video suggests black powder or some other flaggelany and not explosive C4 or TNT. Nevertheless these bombs were designed and carefully placed to kill and maim, no question about it.

A number of groups may try and take credit for this, be true to your skeptical roots folks. Also bear in mind that in the past — the Centennial Olympic bombing comes to mind — the early and strongly suspected person, a local police officer named Richard Jewell, turned out to have nothing to do with the attack[s], Jewell was in fact a hero on that scene in 1996. The actual perp was a right-wing anti-abortion terroist who remained at large for years afterward.