Scientists working at the super collider that measured neutrinos seeming to beat Einstein’s cosmic light speed barrier a few months ago say they have uncovered at least two issues with the high-tech gear used to clock the speedy particles. It could boil down to faulty wiring: END_OF_DOCUMENT_TOKEN_TO_BE_REPLACED

And now I have to leave this exciting story and sign in to help people fix their damn computers over the phone … if anyone is seasonally inclined, contributions to my Paypal account, Darksydothemoon@aol.com, might someday help free me of this dreary ball and chain.

The most important insight into our entire cosmos is unfolding in the December afternoon, European time, and all my shitty cable news channels are babbling about is Newt Gingrich and Mitt Romney vying to out know-nothing each other to win know-nothing votes. Churchill was right about democracy …

Word is the Higgs has been glimpsed … So far, eggheads are talking, the webcast is streaming. Still photos being posted here. The Guardian is live blogging updating text here: END_OF_DOCUMENT_TOKEN_TO_BE_REPLACED

The mystery may get a little less mysterious in this afternoon:

(BBC) — Prof Stefan Soldner-Rembold, from the University of Manchester, called the quality of the LHC’s results “exceptional”, adding: “Within one year we will probably know whether the Higgs particle exists, but it is likely not going to be a Christmas present.”
He told me: “The Higgs particle would, of course, be a great discovery, but it would be an even greater discovery if it didn’t exist where theory predicts it to be.”
The Higgs boson is a “fundamental” particle; one of the basic building blocks of the Universe. It is also the last missing piece in the leading theory of particle physics – known as the Standard Model – which describes how particles and forces interact.

Rumors swirled today that data may have been found that supports the Higgs boson at ~126 GeV. Reliable sources have speculated the data will show a certainty, that something’s there, to about 4.2 sigma, the threshold for official detection is 5 sigma, but that only triggers many rounds of attempted confirmation. I’m told that is probably the gist of what CERN will discuss, full statement below: END_OF_DOCUMENT_TOKEN_TO_BE_REPLACED 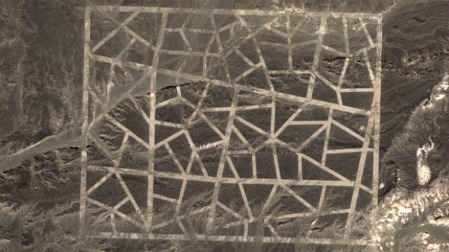 Baffling structure in the Gobi desert found on Google Maps is one of two or more, click on image for more at the Telegraph including a side-show

Using Google maps enterprising researchers have found a network of strange grid lines on the Chinese side of the Gobi Desert. They include military vehicles and reflective substances arrayed around one of the patterns. The origin and purpose of these structures are baffling to most onlookers. But there may be a relatively mundane explanation: END_OF_DOCUMENT_TOKEN_TO_BE_REPLACED 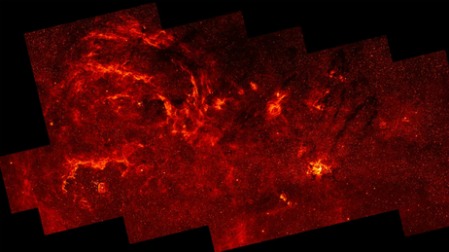 You’re staring straight into the churning heart of our Milky Way galaxy, right through the “teapot” in the constellation Sagittarius, as revealed by infrared light and Mr Hubble’s Space Telescope. Click image for HST homepage. Image description below the fold. END_OF_DOCUMENT_TOKEN_TO_BE_REPLACED 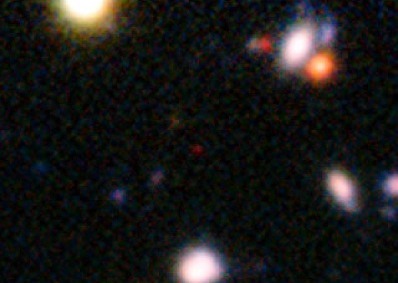 The red speck at the centre of this very deep image from the ESO Very Large Telescope shows the galaxy NTTDF-474, seen when the Universe was only 820 million years old. It is one of the most distant ever to have had its distance measured accurately, and is one of five that have been used to chart the timeline of the reionisation of the Universe about 13 billion years ago. Image: ESO/ L. Pentericci.

There has long been a theory, or perhaps its more of a hypothesis or a conjecture, that the first stars were very different from any class of star we see today. Sci-fi writers and cosmologists wonder if Very Early Massive Objects or VEMO’s might have lit up the early universe and, because of the great density and virtual absence of heavy elements early on, could have had bizarre properties compared to “modern” stars. It’s even possible some may have gone through a phase with nested fusing cores burning multiple substances at the same time, or even semi-distinct cores separated by millions of miles embedded in the same plasma envelope. We may never know just how far off the HR diagram some of these first generation mutants ventured. END_OF_DOCUMENT_TOKEN_TO_BE_REPLACED 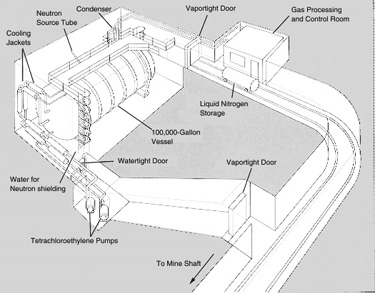 It appears the articles the broke yesterday about neutrinos breaking the light-speed barrier were based on solid science (I can’t believe I just wrote that!). More here:

Over three years, and from 15,000 neutrino “events,” a huge detector at the Italian center deep under mountain rock recorded what OPERA spokesman Antonio Ereditato described as the “startling” findings. He said his team had high confidence they had measured correctly and excluded any possibility of some outside influence, or artefact, affecting the outcome. “My dream is now that other colleagues find we are right,” he added.

OK, admittedly my particle physics has turned to rust over the years. I recall there was some debate over whether or not neutrinos had a rest mass. Was that ever resolved? If they do, then either the mass equation for Special Relativity has to be adjusted, or those particles hit the detector with one hell of a wallop. More than a wallop, theoretically their mass would be greater than infinity on the north side of the speed of light. And if they have no rest mass, and went faster than light, that should open up all kinds of cans of worms in quantum physics.

Without getting all excited and biased, just for fun, let’s stipulate they did beat the speed of light. What’s your guess? Some kind of EPR effect where entanglement transfers into a particle, specifically a neutrino, at the other end? In this case knowing if pairs of particles were made at the origin very close together in time, say an average of 60 nano-seconds apart, might count for something. Some sort of reverse decay event that went anti-time to preserve symmetry or some other book keeping deal? Frankly I have no idea how anything like that would work, but then like I said, my last low level graduate physics class was over 20 years ago and these results, if confirmed, would probably make that course officially obsolete.