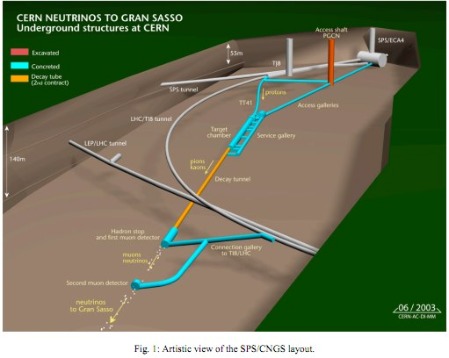 First a short atheist prayer: ‘Ahh sweet Friday, prince of days, deliver us from the evils of the workweek even as we, each in our own way, deliver ourselves from sobriety.’

This past week was the longest of my life. See, in modern corporate America, low-level employees like me are subject to strict attendance policies. Which means that I could either go almost straight from the hospital to work, nine hours a day, no half days or anything like that, with a freshly broken back-bone and a partially collapsed lung, or risk running afoul of that policy. I chose the former, and believe me it came at a damn painful price.

More on Neutrinos on Speed, this time from Sean Carroll, blogging at Cosmic Variance, who actually knows a thing or two about high energy physics (Plus he had that cool graphic above which begged to be swiped). Sean’s take sounds to me like a healthy skepticism:

I don’t mean to impugn the abilities or honesty of the experimenters, who are by all accounts top-notch people trying to do something very difficult. It’s just a very difficult experiment, and given that the result is so completely contrary to our expectations, it’s much easier at this point to believe there is a hidden glitch than to take it at face value. All that would instantly change, of course, if it were independently verified by another experiment; at that point the gleeful jumping up and down will justifiably commence. … This isn’t one of those annoying “three-sigma” results that sits at the tantalizing boundary of statistical significance. The OPERA folks are claiming a six-sigma deviation from the speed of light. But that doesn’t mean it’s overwhelmingly likely that the result is real; it just means it’s overwhelmingly unlikely that the result is simply a statistical fluctuation. There is another looming source of possible error: a “systematic effect,” i.e. some unknown miscalibration somewhere in the experiment or analysis pipeline. (If you are measuring something incorrectly, it doesn’t matter that you measure it very carefully.) In particular, the mismatch between the expected and observed timing amounts to tens of nanoseconds; but any individual “event” takes the form of a pulse that is spread out over thousands of nanoseconds. Extracting the signal is a matter of using statistics over many such events — a tricky business.