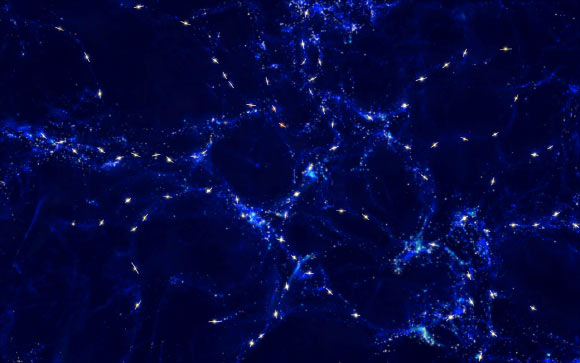 Artist’s impression showing schematically the mysterious alignments between the spin axes of quasars (white) and the large-scale structures (blue) that they inhabit. The rotation axes of the quasars’ black holes are indicated with a line / ESO/M. Kornmess

As we prepare to collectively absorb our Thanksgiving Day feasts and enjoy leftovers, astronomers working with the VLA in Chile have found a massive feature of the large scale cosmos for the mind to try and digest:

“The first odd thing we noticed was that some of the quasars’ spin axes were aligned with each other – despite the fact that these quasars are separated by billions of light-years,” explained Dr Hutsemekers, who is the first author of the paper published in the journal Astronomy & Astrophysics. …

“When astronomers look at the distribution of galaxies on scales of billions of light-years they find that the galaxies form a cosmic web of filaments and clumps. This intriguing arrangement of material is known as large-scale structure.”

Dr Hutsemekers and his colleagues found that the spin axes of the quasars were linked not just to each other, but also tend to be parallel to their host large-scale structures.

Bear in mind, that image is not real, its pure artwork to illustrate the idea. But that idea begs for confirmation and explanation: it could mean there is something awfully important and fundamental going on with the universe at very large scales, something we don’t understand, and that something would probably have to have started early on.

There was already some intriguing structure on the largest scales to marvel at as this illustration of galactic super-clusters over a 300 million light-year span shows. Maybe this new finding, if confirmed, could help us understand why it seems so organized and, dare I say, oddly familiar. 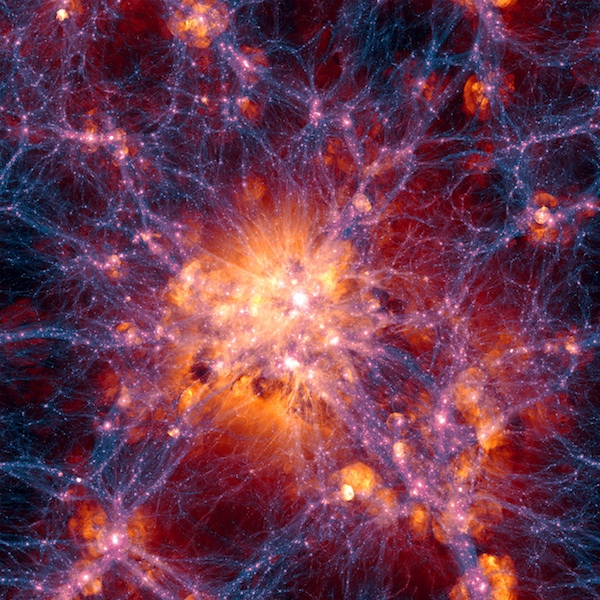 Vaguely familiar enough that every now and then you can find someone speculating these are neurons in the brain of God. Which is a fair enough speculation, I suppose, if we’re way past spit-balling and just randomly drawing ideas out of a hat. Although a lone nerve juncture in the bowels of a shellfish or worm analogue is equally likely — or equally unlikely might be a better way to frame it.

If this is how some complex, interconnected phenomena approaching the intricacies of biochemical processes are organized, yeah that would be beyond cool, it would be mind blowing to say the least. But how could we ever know, how could test such a proposition?These things are huge and we’re forced to observe them on the order of a billion years or more in the past because of their sheer size.

One can safely infer the super-clusters and filaments are subject to relativity, the speed of light over hundreds of millions of light-years, which means any complex processes, no matter how life-like they are, be they routine or grandiose, would take eons to unfold. Plus there aren’t that many super-clusters in the universe, a few thousand to a few million depending on how you count them. Hardly the basis for a complex super-sentient omnipotent-organism-like thingy. If we’re going to compare them to every day phenomena, they look more like the capillary action of water in an ionized solid, or fingers of charged plasma arcing through a charged rarefied gas, and less like the seat of Jehovah’s vast intellect incarnate, at least in my opinion.

Let the War on Christmas resume! » « The spice must flow