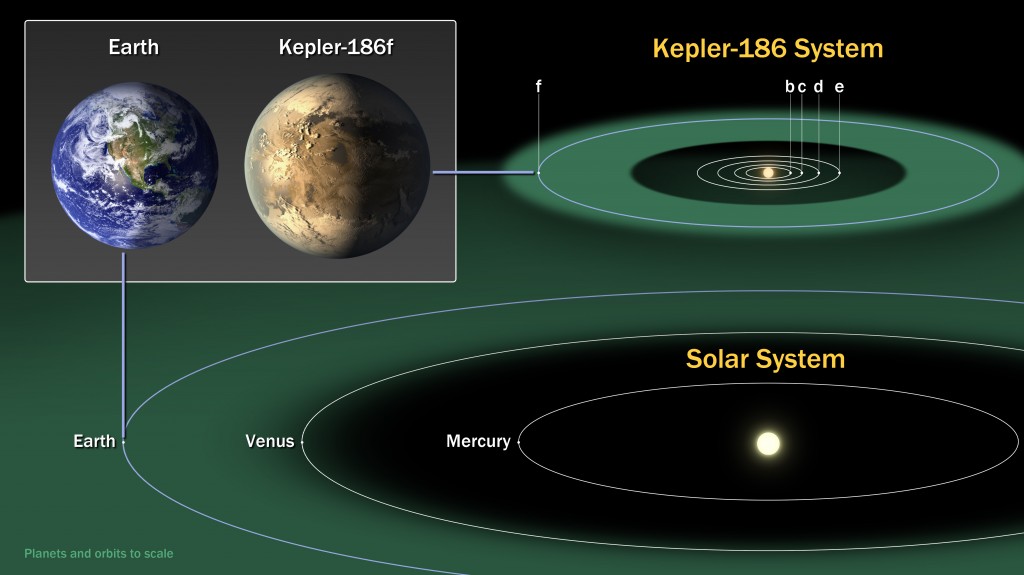 Ustream NASA press conference here (highly recommended). An artist friend may try to squeeze in a hypo illustration. But if someone wants to submit an image of what they think surface might look like, have at it. I’ll consider anything received by tomorrow at 5 PM Central for the science round up at Daily Kos linked to the web site of your choosing.
Hiding in plain sight in data already received from the now defunct Kepler observatory was the best candidate yet for the Holy Grail in planetary astronomy. It’s almost exactly the same size as Earth, maybe a touch larger, and it orbits in the cooler part of the system’s habitable zone:

NASA — Using NASA’s Kepler Space Telescope, astronomers have discovered the first Earth-size planet orbiting a star in the “habitable zone” — the range of distance from a star where liquid water might pool on the surface of an orbiting planet. The discovery of Kepler-186f confirms that planets the size of Earth exist in the habitable zone of stars other than our sun. While planets have previously been found in the habitable zone, they are all at least 40 percent larger in size than Earth and understanding their makeup is challenging. Kepler-186f is more reminiscent of Earth.

“The discovery of Kepler-186f is a significant step toward finding worlds like our planet Earth,” said Paul Hertz, NASA’s Astrophysics Division director at the agency’s headquarters in Washington. “Future NASA missions, like the Transiting Exoplanet Survey Satellite and the James Webb Space Telescope, will discover the nearest rocky exoplanets and determine their composition and atmospheric conditions, continuing humankind’s quest to find truly Earth-like worlds.”

That is exactly where you would want a planet a tiny bit larger than Earth to be located to maximize the odds of it having liquid water on its surface. If we assume it has more or less the same density as Earth, its gravity would be slightly higher, maybe five to 10 percent higher, and its atmosphere might therefore be slightly thicker. That gives186f a good chance of having a mild greenhouse effect, keeping it plenty warm enough for temperate climes without running away to extremes like Venus. Phil has more:

I say potentially because honestly we don’t know all that much about it besides its size and distance from its star (and its year—it takes 130 days to orbit the star once). The next things we’d need to know about it are the mass, what its atmosphere is like, and the surface temperature. The gravity of the planet depends on its mass, and in many ways the atmosphere depends on the gravity. Unfortunately, we don’t know either, and we’re unlikely to. The techniques used to find planet masses aren’t up to the task for this planet—the star is too dim to get reliable data. The same is true for any air the planet might have as well. And without that, we don’t really know its surface temperature.

He’s right of course, but it’s not likely to be a gas dwarf, not that close to its sun. It could be a water world or a carbon planet. Or it could be a rocky-metal planet with some water similar to Earth. Kepler’s not done, there’s still meat on that bone, roughly 2000 additional exoplanet candidates awaiting in depth analysis, more interesting planets are likely waiting to be found. And a ton of research will go into the next planet hunter observatory along with land-based work on objects like Kepler 186f.

Hypothetical illustration of the surface of Kepler 186f: Lycoris » « Nothing says Freedom quite like using human shields