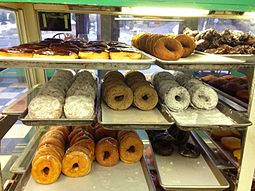 Heavens-to-betsy, socialism knows no bounds. At least according to Rand Paul, who is either 1) up in arms over an egregious usurper government gone awry, or 2) wincing from Gov Cris Christie’s media blitz over the weekend:

Hullabaloo — Sen. Rand Paul warned Americans that the federal government is targeting doughnuts, the latest example of the oppressive nanny state in America. “They’re coming after your doughnuts!” the Kentucky Republican said, referring to the Food and Drug Administration decision to ban trans fats.

Paul added that if the FDA was banning trans fats, the employees of the agency should be forced to get healthy themselves. “I say we should line every one of them up. I want to see how skinny or how fat the FDA agents are that are making the rules on this,” Paul said…”Because if we’re going to have a nanny state and everybody’s got to eat the right thing, and you can’t eat a doughnut, maybe we just ought to enforce it on the government workers first,” he said.

A tale of two images » « Know nothings on parade: anti-vaxxars