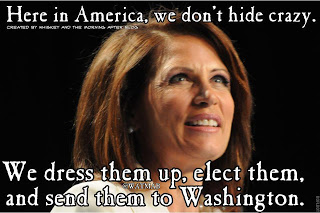 Crazy or craven? Either way Michelle Bachmann announces we are in the end times. Her reasoning, for lack of a better word, is purely political and aimed at guess who’s ‘support of Al Qaeda’? Who else!?

Rightwing Watch — The Minnesota congresswoman referred to a decision by the Obama administration to allow vetted Syrian rebels not affiliated with terrorist organizations to help them resist chemical weapons attacks, which was spurred by the Syrian regime’s use of chemical weapons on civilians.While the administration’s move is only related to non-lethal, defensive and protective aid, Bachmann falsely claimed that “President Obama waived a ban on selling arms to terrorists.” … “President Obama waived a ban on arming terrorists in order to allow weapons to go to the Syrian opposition,” Bachmann said. “Your listeners, US taxpayers, are now paying to give arms to terrorists including Al Qaeda.”

Bachmann said that the Al Qaeda funding (which isn’t happening) is a sign of the End Times: “This happened and as of today the United States is willingly, knowingly, intentionally sending arms to terrorists, now what this says to me, I’m a believer in Jesus Christ, as I look at the End Times scripture, this says to me that the leaf is on the fig tree and we are to understand the signs of the times, which is your ministry, we are to understand where we are in God’s end times history.”

That tricksy Kenyan. Ordering a hit on bin Laden and snatching terrorists off the streets of Libya, endless drone strikes and constant monitoring of our cell phones, email, and voice convos, all is just a cover for his secret world-ending pact with Al Qaeda! And yet somehow, this is good news in Bachmann world:

“Rather than seeing this as a negative, we need to rejoice, Maranatha Come Lord Jesus, His day is at hand,” Bachmann continued. “When we see up is down and right is called wrong, when this is happening, we were told this; these days would be as the days of Noah.”

Yes, nothing is as exciting to look forward to as genocidal deities in a cosmic pissing match with humans as pawns culminating in a world-wide disaster killing off all of humanity except one drunk dad and his kids …