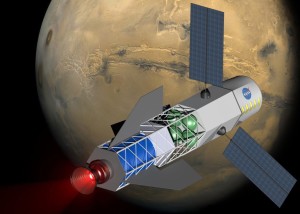 Maybe Mars Inspiration should hold off on their proposed flyby launching in 2018. A new grant by NASA will reportedly develop a revolutionary engine that could reduce time travel to the Red Planet and other celestial destinations to a few weeks within a decade:

Earthsky — Is a fusion-powered rocket feasible? These researchers say it is. They say they’ve conducted successful lab tests of all portions of the process and that their task now is to combine these isolated test into a final experiment that produces fusion. The team said in a press release issued April 4, 2013 that it hopes to have everything ready for a first test by the end of summer 2013.

NASA estimates that a round-trip human expedition to Mars would take more than four years using current technology. The large amount of chemical rocket fuel would be expensive; launch costs alone would be more than $12 billion, NASA says. In contrast, the team in Washington has published papers calculating the potential for 30- and 90-day expeditions to Mars, using a fusion rocket.

There are no transitional fossils! » « Seeing a lot of this lately