As the waning gibbous moons races toward the western horizon and dawns break east, a brief period of mass hysteria will grip Christendom the world over tomorrow, in fact it has already begun. Zombie resurrection may be the center of ancient ceremony, but here in the hallowed chambers of Godless HQ, we know what’s really important: family, food, and easter eggs! On the later there lays two intertwined tales, one with tails, one without, and a story of love right down to the flowers and sweets.

It begins a long time ago in this galaxy, but back then it was far, far away. If you could travel back to that time and place, about 150 million years, you’d be well advised to watch where you step! Saurian monsters abound, hungry eyes watch from ambush. With all that to worry about, it would be easy to miss the most important new organism to arise in ages, standing low amid the tangled ferns and towering conifers. 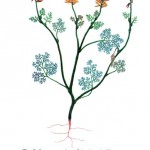 But a sharp-eyed observer might have made out a dash of red or yellow, in contrast to a planet which had known mostly green rain forests and blue oceans for eons. It was the first angiosperm, more commonly known as a flowering plant, and it would change the world. One of the earliest successful versions may have resembled the Archaefructus, currently classified by some paleobotonists as a possible transitional angiosperm, and believed to inhabit the marshy shores of late Jurassic creeks and ponds. Within 50 million years they were all the rage.

It was not long after that when the solar system cruelly tossed a space mountain into the Yucatan 65 million years ago. That’s when mammals came into their own, or so the story usually goes. But unlike the familiar large mammals we know today, those first rodent-sized and rabbit-like pioneers didn’t have to wait for dinos to fade into natural history before they could inherit the wind. Small proto mamals like the

Cynodont to right were already thriving along side the reptilian titans long before the K-T boundary was laid. And, as luck would have it, with their furry insulation, small size and short generations, varied diet, and warm burrows, small mammals were especially equipped to survive and adapt in the harsh aftermath of the K-T Extinction.

At first glance rabbits resemble rodents, the same taxon as rats and chipmunks, arguably the most successful order of mammals today. But more recent anatomical and molecular studies suggests rabbits may not be rodents at all*Andrew. In fact, there has been some discussion that they might be an offshoot or close relative of early Artiodactyls. 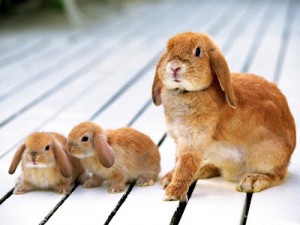 Modern artiodactyls include the largest, most unrabbit-like animals on earth today. But back in the Paleocene they were tiny and some, like mouse deer, still are. With tens of millions of years to work with, it’s entirely possible an early Artiodactyla or forerunner of same evolved into an order of their own, called Lagomorphs, now represented by rabbits, pikas, and hares. If so, one of the closer extant relatives of petite bunny rabbits would be the great Blue Whale!

None of this would have been possible without flowering plants and the rich ecosystems they support. The partnership offered to animals by humble grasses alone transformed entire continents. By about 30 million years grasses dominated the steamy forest floors and vast arid plains, giving rise to the largest land-dwelling mammals in the history of life on earth. Over the next 25 million years a few of these hardy flowering grasses evolved into the forerunners of modern grain and sugar cane. Those two groups of angiosperms now account for about two-thirds to three-quarters of the human diet. Trillions of calories are consumed every day in the form of wheat, rice, corn, and sugar. And each pound of meat, every gallon of milk, represents bushels of grain. Quite literally, humans are flower-powered.

That goes for rabbits too; if cartoons have taught me anything, they are particularly fond of orange-yellow sugary tubers. But it’s a fair bet hungry wild rabbits wouldn’t turn their cute little noses up at a tasty mouthful of grain, a slice of fruit, or hunk-o-nut. So plants developed potent counter measures. At some point in that long evolutionary arc rabbits developed a most, shall we say, unusual dietary counter measure. Maybe, not too long ago, they were carnivores or insectivores before suddenly going vegan. Whatever the reason, rabbits today can and do ingest their meals … twice.

Pet rabbit food often comes in the form of, ahem, predigested pellets. So if you want to see it – and honestly, who wouldn’t? – try feeding them some raw chow in the evening and watching later at night. I’m told no respectable rabbit will eat its own poop in the light of day.

Regardless of how and when they evolved, nowadays lagomorphs are one of the most geographically widespread taxons in the world. They make a living in desert scrub, thick forests, and well past the Arctic Circle. They owe that success in part to two of the sharpest weapons in their evolutionary arsenal, 1) an impressive set of self renewing incisors that can strip tough bark off a log and inflict a surprisingly savage bite, and 2) they breed like, well, rabbits. In captivity, with plenty of food and water, a rabbit doe can produce five or six kits per kindle per month, each of which are sexually mature in ten to twelve weeks. Run that forward and we’re talking something like a thousand rabbits in about one year.

Wild rabbits are highly agile, master tunnel builders, sometimes constructing vast warrens with myriad intertwining subterranean connections and escape routes making them difficult prey for man or animal. Since rabbits are mostly nocturnal, can eat near half their body weight in a single night, and they’re perfectly happy to chow down on the grain, leaf, and root, they can pose a serious threat to agriculture. But they’ve also been domesticated for food, fur, and more lately companionship. Dozens of domestic breeds exist, with more variations proudly presented by loyal friends of these delightful, furry animals every year.

Nature being the cruel mistress she is, plants could never fully trust their new animal partners, they developed potent counter measures. Wait until fruit is ripe, when the seeds are ready for dispersal, and you were rewarded with a tasty treat. Eat them beforehand, and you might get a tummy ache from hell. Consuming the wrong parts, like leaves, stems, or bark, could earn the offender a lingering, toxic death. Many modern drugs originate from such defenses; Quinine from tree bark, caffeine from coffee beans, and narcotics from poppies.

I’ve shared one of those defenses with many a mate. In fact, back in late March on this very weekend, in the closing days of the go-go 90s and on my first date with the future Mrs. DS,  we ingested a highly addictive mind altering substance, stared into each other’s now blazing eyes, and fell madly, hopelessly in love. The source was a flowering plant found in present day Latin America, the substance it produces is truly sublime, and for some people, downright addictive. It’s not without risk: first time users can fall prey to serious reactions, long term use can lead to systemic organ failure, in some cases a single dose can precipitate a deadly cascade of events leading to sudden death. But we broke no Draconian drug laws, the stuff we took was first used in crude form by Meso-Americans over a thousand years ago. The Aztecs called it Xo-co-latl, but we know it today as chocolate. 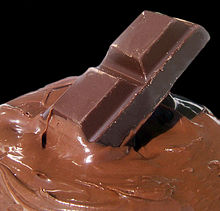 Here me oh Creator, we and my atheist friends who doubt your literal existence do offer one olive branch to the mighty and glorious Goddess Of Chocolate, that is in the unlikely event you indeed live and give a flying coprolite about us: today we thank you for the most sumptuous of all your Holy work, the dark creamy ancestor of Xo-co-latl and her many palatable relatives now flying off the shelves, for they demand my respect and elicit my gratitude.

There’s just one thing: at the risk of sounding like old Irontail, I must report that at present there is no evidence in the fossil record of a man-sized, bipedal rabbit creeping around in the wee hours delivering candied eggs or self portraits rendered in sweet chocolate. But this I promise: here there be chocolate, egg-shaped and self lagomorphic self-sculpture, its origin irrelevant

But on the topic of man-sized bunnies, let us not count out the rabbit, let us not count out anything, no matter how modest. Primed by the unstoppable engine of natural selection and fueled by space and time beyond mortal comprehension the sky’s the limit. It wasn’t that long ago, from a cosmic perspective, when ancestors of the mammals celebrating Christ’s resurrection today sat in the crook of a tree, munching leaves, pondering the primeval world before them with hare-sized brains. One of those leaf munching descendents sits now, in a fractal circle around an electronic campfire in the ancient tradition of our kind. Our faces flicker, lit by dancing domestic electrons, as swap stories of man and nature. Our technology has certainly changed, can the same be said for our nature?

A lot can happen in tens of million of years. Lagomorphs are highly social and quick on their feet. They breed fast, they evolve fast, and they can live patiently underground in sand, soil, or snow nibbling at dead roots and fallen leaves, while the world above convulses in natural holocaust or one of our own making. Given time, who can say what the distant future holds for our lovable long-eared friends? So let’s not count out Peter Cottontail, or something a heck of a lot scarier, just yet.

A time for renewal & a question for regs » « Pope washes ‘controversial’ feet: Geller & usual suspects will get right on this …