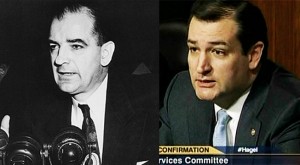 I’ve been watching this clown with interest ever since he ended up being one of our two wackaloon senators from Texas. Cruz has a big problem in the Lone Star State. It’s one of the last hold outs of the dying Teaparty, and a bunch of those crazy mother fuckers hate Hispanics. They just despise them, for no reason other than pure, evil, xenophobic racism. A guy with the last name of Cruz gets a shot with that bunch for two reasons only: first he helps put a thin veneer of non racism on an overtly racist sub party, and two, he has to be or at least act like he is snake venom spitting crazy. It seems Cruz has chosen to serve that last goal by playing Joe McCarthy:

New Yorker — Last week, Texas Senator Ted Cruz’s prosecutorial style of questioning Chuck Hagel, President Obama’s nominee for Defense Secretary, came so close to innuendo that it raised eyebrows in Congress, even among his Republican colleagues. Senator Lindsey Graham, Republican of South Carolina, called Cruz’s inquiry into Hagel’s past associations “out of bounds, quite frankly.” The Times reported that Senator John McCain, Republican of Arizona, rebuked Cruz for insinuating, without evidence, that Hagel may have collected speaking fees from North Korea. Some Democrats went so far as to liken Cruz, who is a newcomer to the Senate, to a darkly divisive predecessor, Senator Joseph R. McCarthy, whose anti-Communist crusades devolved into infamous witch hunts. Senator Barbara Boxer, a California Democrat, stopped short of invoking McCarthy’s name, but there was no mistaking her allusion when she talked about being reminded of “a different time and place, when you said, ‘I have here in my pocket a speech you made on such-and-such a date,’ and of course there was nothing in the pocket.”

Boxer’s analogy may have been more apt than she realized. Two and a half years ago, Cruz gave a stem-winder of a speech at a Fourth of July weekend political rally in Austin, Texas, in which he accused the Harvard Law School of harboring a dozen Communists on its faculty when he studied there. Cruz attended Harvard Law School from 1992 until 1995. His spokeswoman didn’t respond to a request to discuss the speech.

Cruz has a bigger problem now: like another cartoon figure named Homer Simpson once found out, what plays in Springfeld doesn’t always fly in Capital City. Cruz is revealed here as a sociopathic fraud (Or he is possibly pathologically insane, which most reporters doubt), he’s seen now as a flim-flam artist of the most transparent sort. He can’t back down without breaking his unholy covenant with the losers that put him in power, but if he keeps it up he risks becoming a full on radioactive laughingstock within his own caucus.

His best bet, indeed his only real course, is to just stop and hope it blows over without any base blowback. Because right now, as of this morning anyway, even the local papers in Texas are turning against him, brutally, like a rabid dog. And If this ends up blowing up in his face, Mr Cruz will have deserved every last piece of painful shrapnel.